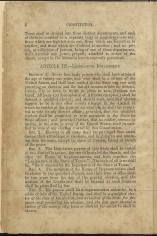 SECTION 1. Every free male person who shall have attained the age of twenty-one years, and who shall be a citizen of the United States, and shall have resided in this State one year next preceding an election, and the last six months within the district, county, city or town in which he offers to vote, (Indians not taxed, Africans and descendants of Africans excepted,) shall be deemed a qualified elector; and should such qualified elector happen to be in any other county situated in the district in which he resides at the time of an election, he shall be permitted to vote for any district officer; provided, that the qualified electors shall be permitted to vote anywhere in the State for State officers; and provided further, that no soldier, seaman or marine, in the army or navy of the United States, shall be entitled to vote at any election created by this Constitution.

SEC. 2. Electors in all cases shall be privileged from arrest during their attendance at elections, and in going to and returning from the same, except in cases of treason, felony or breach of the peace.

SEC. 4. The members of the House of Representatives shall be chosen by the qualified electors, and their term of office shall be two years from the day of the general election, and the sessions of the Legislature shall be biennial at such times as shall be prescribed by law.

SEC. 6. All elections by the people shall be held at such time and places in the several counties, cities or towns as are now or may hereafter be designated by law.

SEC. 8. Such mode of classifying new additional Senators shall be observed, as will as nearly as possible, preserve an equality of number in each class.

SEC. 9. When a Senatorial District shall be composed of two or more counties, it shall not be separated by any county belonging to another district.

SEC. 11. The House of Representatives, when assembled, shall elect a speaker and its other officers, and the Senate shall choose a President for the time being, and its other officers. Each House shall judge of the qualifications and elections of its own members; but contested elections shall be determined in such manner as shall be directed by law; two-thirds of each House shall constitute a quorum to do business, but a smaller number may adjourn from day to day, and compel the attendance of absent members in such manner and under such penalties as each House may provide.

SEC. 12. Each House may determine the rules of its own proceedings, punish members for disorderly conduct, and with the consent of two-thirds, expel a member, but not a second time for the same offence.

SEC. 13. Each House shall keep a journal of its own proceedings, and publish the same, and the yeas and nays fo the members of either House on any question shall, at the desire of any three members present, be entered on the journal.

SEC. 15. Senators and Representatives shall, in all cases, except in treason, felony, or breach of the peace, be privileged from arrest during the session of the Legislature, and in going to and returning from the same, allowing one day for every twenty miles such member may reside from the place at which the Legislature is convened.

SEC. 16. Each House may punish, by imprisonment, during the sessions, any person not a member, for disrespectful or disorderly conduct in its presence, or for obstructing any of its proceedings, provided such imprisonment shall not, at any one time, exceed forty-eight hours.

SEC. 17. The doors of each House shall be kept open.

SEC. 18. Neither House shall, without the consent of the other, adjourn for more than three days, nor to any other place than that in which they may be sitting, without the concurrence of both Houses.

SEC. 19. Bills may originate in either House, and be amended, altered or rejected by the other; but no bill shall have the force of a law, until on three several days it be read in each House, and free discussion be allowed thereon, unless, in case of great emergency, four-fifths of the House in which the bill shall be pending, may deem it expedient to dispense with this rule; and every bill having passed both Houses shall be signed by the Speaker and President of their respective Houses.

SEC. 20. All bills for raising revenue shall originate in the House of Representatives, but the Senate may amend or reject them as other bills.

SEC. 22. Each member of the Legislature shall receive from the Public Treasury a compensation for his services, which may be increased or diminished by law; but no increase of compensation shall take effect during the session at which such increase shall be made.

SEC. 23. No Senator or Representative shall, during the term for which he may be elected, be eligible to any office of profit under this State which shall have been created, or the emoluments of which may have been increased during such term; and no member of either House of the Legislature, during the term for which he is elected, although he may resign his seal as such member, shall be eligible to any office or place, the appointment to which may be made in while, or in part, by either branch of the Legislature. Nor shall members of either House vote for a member of their own body, though he resign his deal for the same, for Senator in the Congress of the United States. Nor shall members thereof be capable of voting for a member of their own body for any office whatever, except it be for Speaker of the House of Representatives, and President for the time being of the Senate, who shall be elected from their respective bodies.

SEC. 24. No Judge of any Court of law or equity, Secretary of State, Attorney General, Clerk of any Court of Record, Sheriff or Collector, or any person holding a lucrative office under the United States or this State, or any foreign government, shall be eligible to the Legislature, nor shall at the same time hold or exercise any two offices, agencies or appointments of trust or profit under this State; provided, that officers of the militia to which there is attached no annual salary, the office of Notary Public, and the office of Justice of the Peace, shall not be deemed lucrative; and that one person may hold two or more county offices, if so provided by the Legislature.

SEC. 25. No person who at any time may have been a collector of taxes or who may have been otherwise entrusted with public money, shall be eligible to the Legislature or to any office of profit or trust under the State government, until he shall have obtained a discharge for the amount of such collections, and for all public money with which he may have been entrusted.

SEC. 26. Ministers of the gospel being by their profession dedicated to God and the care of souls, ought not to be diverted from the great duties of their functions; therefore, not minister of the gospel, or priest of any denomination whatever, shall be eligible to the Legislature.

SEC. 27. Elections for Senators and Representatives shall be general throughout the State, and shall be regulated by law.

SEC. 28. The Legislature shall cause an enumeration to be made every ten years, commencing on the 6th day of February, A. D. 1875, of all the inhabitants, (including Indians taxed) of the State, designating particularly the number of qualified electors, and the age, sex and color of all others, (herein following the classification of the United States census,) and the whole number of representatives shall, at the several periods of making such enumeration, be fixed by the Legislature and apportioned among the several counties, cities and towns according to the number of white population in each, and shall not be less than forty-five, nor more than ninety; provided, that there shall be an enumeration and an apportionment made in the year 1870, in the manner here indicated.

SEC. 29. Until changed by law, the act of apportionment passed the 6th day of February, A. D. 1860, by the Legislature of this State, shall remain in force.

SEC. 30. The whole number of Senators shall, at the next session after the several periods of making the enumeration, be fixed by the Legislature, and apportioned among the several districts to be established by law according to the number of qualified electors, and shall never be less than nineteen nor more than thirty-three.

SEC. 33. The City of Austin is hereby declared to be the seat of government of this State until removed by an election of the people; and the title to the tract of land surveyed by virtue of the headright certificate of Samuel Goucher, for one-third of a league which was selected and condemned to the use of the Republic of Texas under an act of the Republic of Texas, entitled "An Act for the permanent location of the seat of government," approved the 14th day of January, A. D. 1839, be and the same is hereby confirmed; any irregularity or failure to make proper parties or other defects in the proceedings had under said act to the contrary notwithstanding; provided, nevertheless, that the lawful owner of said land, his heirs, assigns or legal representatives, may at any time within one year from the adoption of this Constitution, institute proceedings and have compensation as provided by act of the Legislature of the State of Texas, entitled "An Act for quieting the title to real estate in the City of Austin," approved 18th December, 1857. 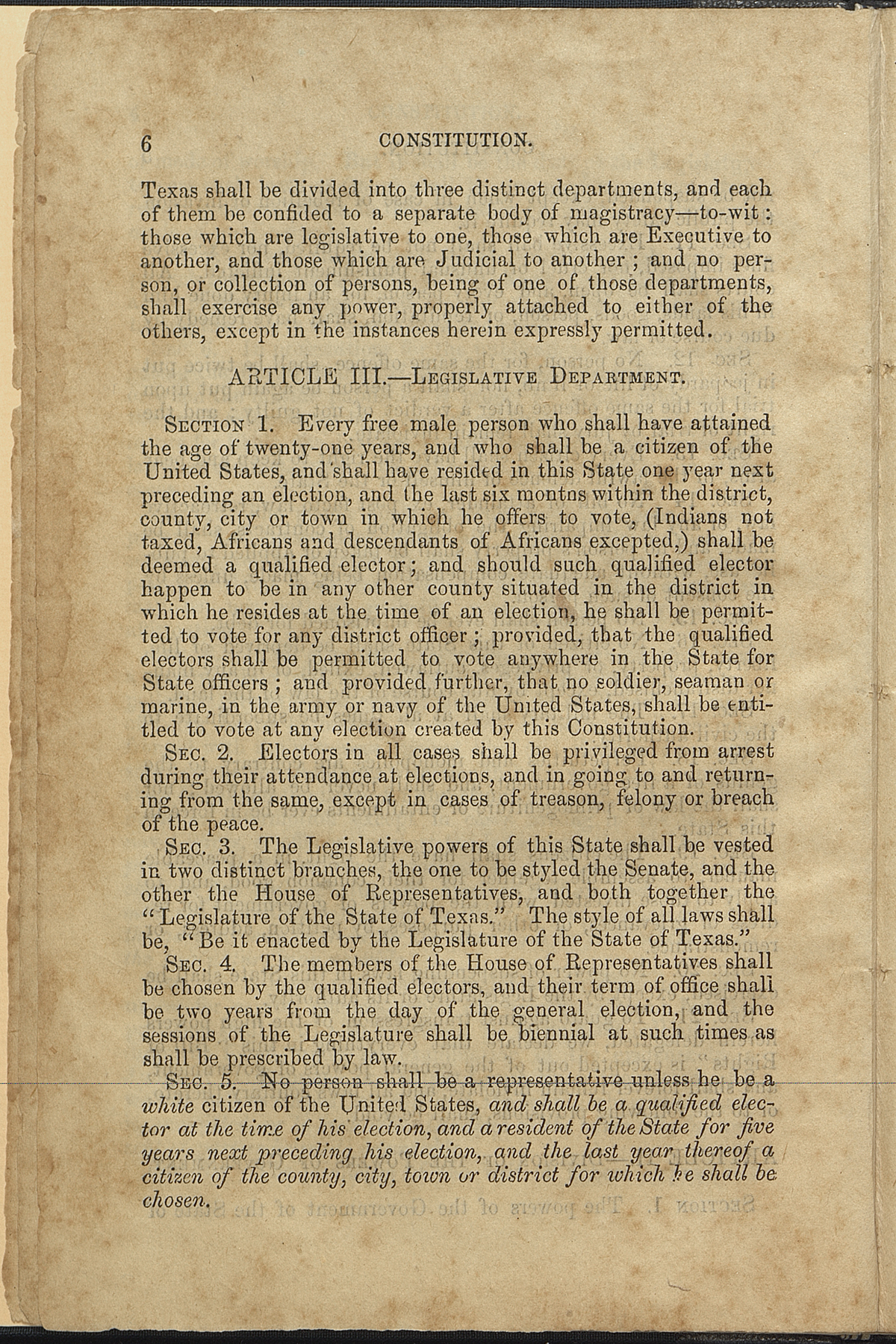 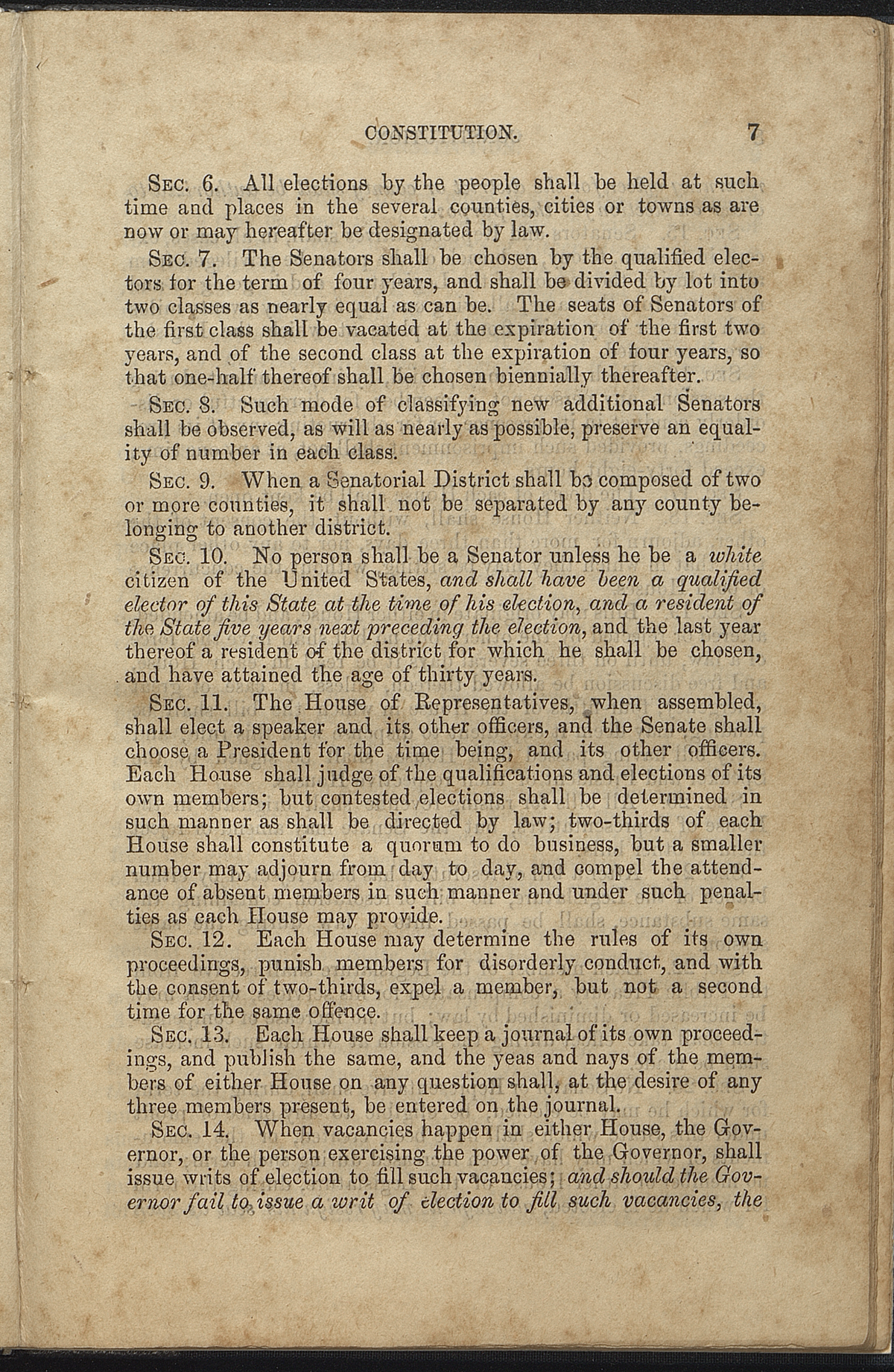 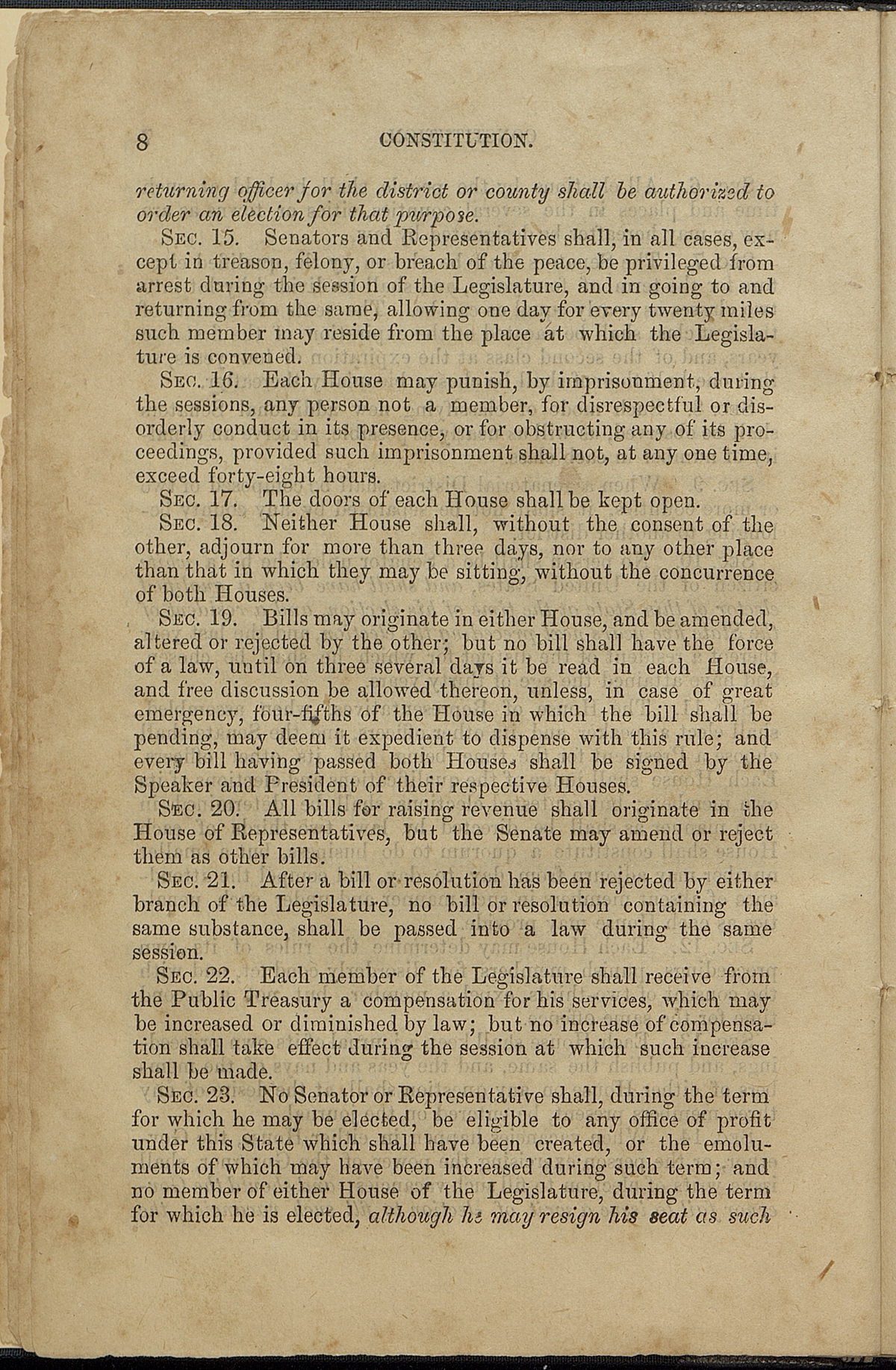 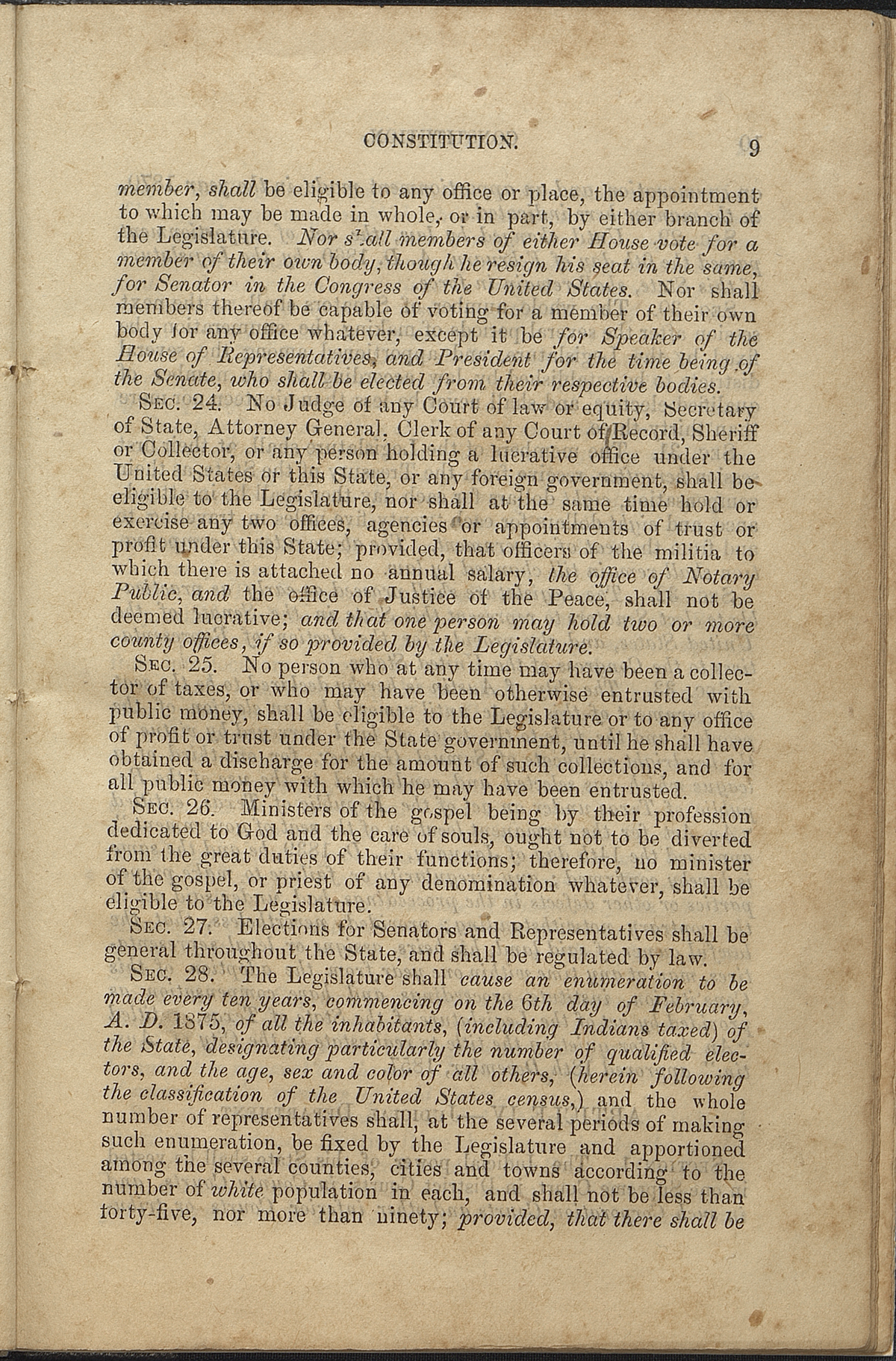 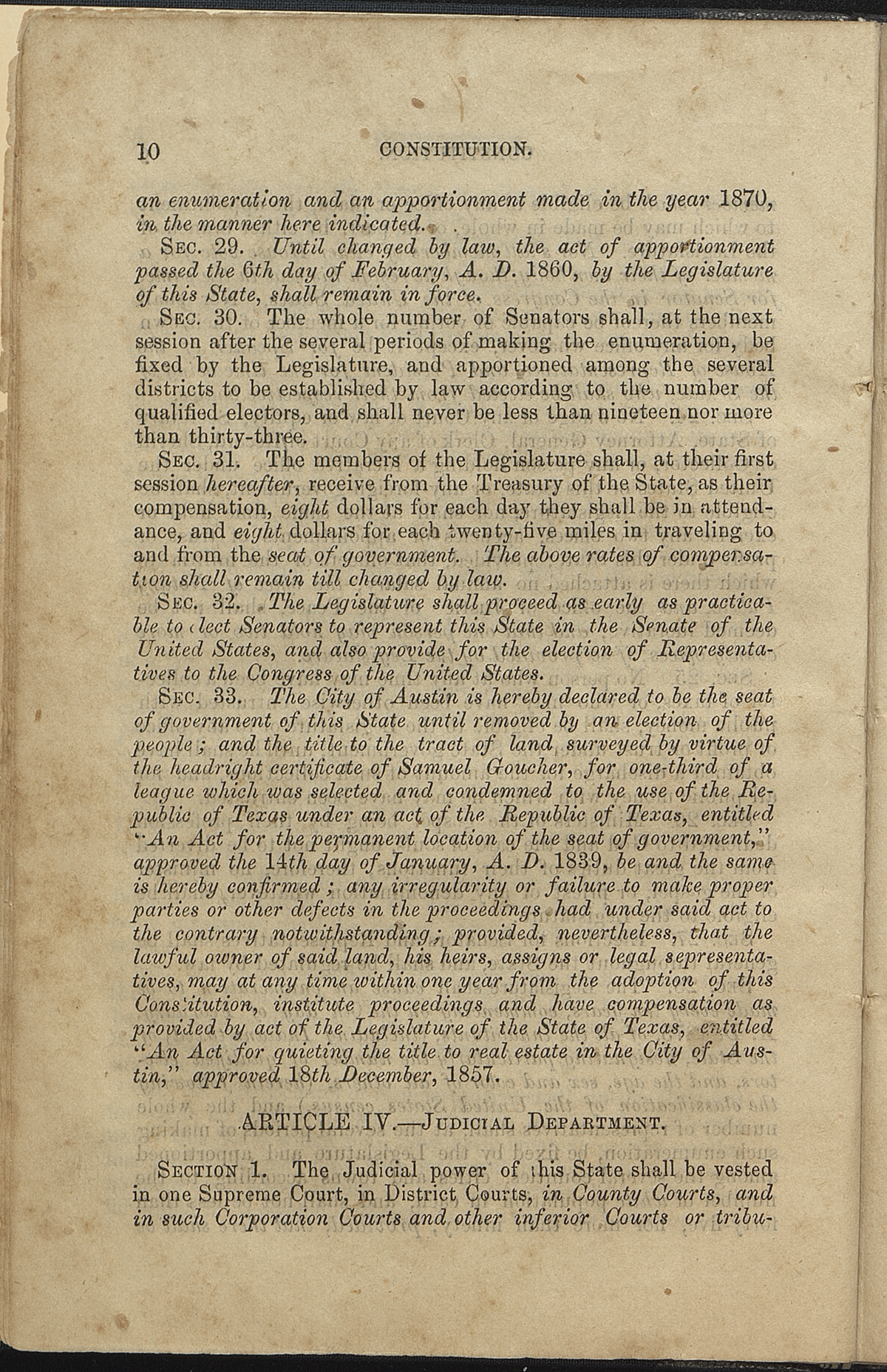