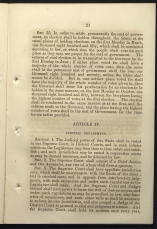 SECTION 1. The Judicial power of this State shall be vested in one Supreme Court, in District Courts, and in such inferior courts as the Legislature may from time to time ordain and establish; and such jurisdiction may be vested in corporation courts as may be deemed necessary, and be directed by law.

SEC. 2. The Supreme Court shall consist of a Chief Justice and two Associates, any two of whom shall form a quorum.

SEC. 3. The Supreme Court shall have appellate jurisdiction only, which shall be co-extensive with the limits of the State; but in criminal cases, and in appeals from interlocutory judgments, with such exceptions and under such regulations as the Legislature shall make. And the Supreme Court and Judges thereof shall have power to issue the writ of habeas corpus, and under such regulations as may be prescribed by law, may issue writs of mandamus, and such other writs as shall be necessary to enforce its own jurisdiction, and also compel a Judge of the District Court to proceed to trial and judgment in a cause. And the Supreme Court shall hold its sessions once every year, between the months of October and June inclusive, at not more than three places in the State.

SEC. 4. The Supreme Court shall appoint its own clerks, who shall hold their offices for four years, and be subject to removal by the said court for neglect of duty, misdemeanor in office, and such other causes as may be prescribed by law.

SEC. 5. The Governor shall nominate, and by and with the advice and consent of two-thirds of the Senate, shall appoint the Judges of the Supreme and District Courts, and they shall hold their offices for six years.

[The two following amendments were made to the Constitution on the 16th January, 1850:

SEC. 1. The Judges of the Supreme Court, Judges of the District Courts, Attorney General, District Attorneys, Comptroller of Public Accounts, Treasurer of the State, and the Commissioner of the General Land Office, shall, at the expiration of their respective terms of office, or in case a vacancy may occur in either of them, by death, resignation, or otherwise, after this amendment takes effect, and thereafter, he elected by the qualified electors of the State, in the manner prescribed by law.

SEC. 2. That the election for District Judges and District Attorneys shall be confined to their respective districts.]

SEC. 6. The state shall be divided into convenient judicial districts. For each district, there shall be elected a Judge who shall reside in the same, and hold the courts at one place in each county, and at least twice in each year, in such manner as may be prescribed by law.

SEC. 8. The Judges of the Supreme and District Courts, shall be removed by the Governor, on the address of two-thirds of each House of the Legislature, for wilful neglect of duty or other reasonable cause which shall not be sufficient ground for impeachment; provided however, that the cause or causes for which such removal shall be required, shall be stated at length in such address, and entered on the journals of each House; and provided further, that the cause or causes, shall be notified to the Judge so intended to be removed; and he shall be admitted to a hearing in his own defence before any vote for such address shall pass: And in all such cases, the vote shall be taken by yeas and nays and entered on the journals of each House respectively.

SEC. 9. All Judges of the Supreme and District Courts, shall by virtue of their offices be conservators of the peace throughout the State. The style of all writs and process schall be "The State of Texas." All prosecutions shall be carried on in the name and by the authority of the "State of Texas," and conclude, "against the peace and dignity of the State."

SEC. 10. The District Court shall have original jurisdiction of all criminal cases; of all suits in behalf of the State to recover penalties, forfeitures, and escheats, and of all cases of divorce; and of all suits, complaints, and pleas whatever, without regard to any distinction between law and equity, when the matter in controversy shall be valued at, or amount to one hundred dollars, exclusive of interest; and the said courts, or the Judges thereof, shall have power to issue all writs, necessary to enforce their own jurisdiction and to give them a general superintendence and control over inferior jurisdictions. And in the trial of all criminal cases, the jury trying the same shall find and assess the amount of punishment to be inflicted, or fine imposed; except in capital cases, and where the punishment or fine imposed, shall be specifically imposed by law.

SEC. 11. There shall be a Clerk of the District Court for each county, who shall be elected by the qualified voters for members of the Legislature, and who shall hold his office for four years, subject to removal by information, or by presentment of a grand jury and conviction by a petit jury. In case of vacancy, the Judge of the district shall have the power to appoint a Clerk, until a regular election can be held.

["By the amendment made to the Constitution in 1850, the Attorney General and District Attorneys are elected by the people."]

SEC. 13. There shall be appointed for each county a convenient number of Justices of the Peace, one Sheriff, one Coroner, and a sufficient number of Constables, who shall hold their offices for two years, to be elected by the qualified voters of the district or county, as the Legislature may direct. Justices of the Peace, Sheriffs and Coroners, shall be commissioned by the Governor. The Sheriff shall not be eligible more than four years in every six.

SEC. 14. No Judge shall sit in any case wherein he may be interested, or where either of the parties may be connected with him by affinity or consanguinity, within such degrees as may be prescribed by law, or where he shall have been of counsel in the cause. When the Supreme Court or any two of its members shall be thus disqualified to hear and determine any cause or causes in said court, or when no judgment can be rendered in any case or cases in said court, by reason of the equal division of opinion of said Judges, the same shall be certified to the Governor of the State, who shall immediately commission the requisite number of persons learned in the law for the trial and determination of said case or cases. When the Judges of the District Court are thus disqualified, the parties may, by consent, appoint a proper person to try the said case; and the Judges of the said courts may exchange districts, or hold courts for each other, when they may deem it expedient, and shall do so when directed by law. The disqualification of Judges of inferior tribunals, shall be remedied as may hereafter be by law prescribed.

SEC. 15. Inferior tribunals shall be established in each county for appointing guardians, granting letters testamentary and of administration; for settling the accounts of executors, administraitors, and guardians, and for the transaction of business appertaining to estates; and the District Courts shall have original and appellate jurisdiction, and general control over the said inferior tribunals, and original jurisdiction and control over executors, administrators, guardians, and minors, under such regulations as may be prescribed by law.

SEC. 16. In the trial of all causes in equity in the District Court, the plaintiff or defendant, shall, upon application made in open court, have the right of trial by jury, to be governed by the rules and regulations prescribed in trials at law.

SEC. 17. Justices of the Peace shall have such civil and criminal jurisdiction as shall be provided by law.

SEC. 18. In all causes arising out of a contract, before any inferior judicial tribunal, when the amount in controversy shall exceed ten dollars, the plaintiff or defendant shall, upon application to the presiding officer, have the right of trial by jury.

SEC. 19. In all cases where Justices of the Peace, or other judicial officers of inferior tribunals, shall have jurisdiction in the trial of causes, where the penalty for the violation of a law is fine or imprisonment (except in cases of contempt) the accused shall have the right of trial by jury.