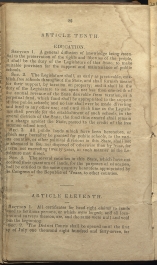 SEC. 1. All certificates for head-right claims to lands, issued to fictitious persons, or which were forged, and all locations and surveys thereon, are, and the same were, null and void from the beginning.

SEC. 2. The district courts shall be opened until the first day of July, one thousand eight hundred and forty-seven, for the establishment of certificates for head rights not recommended by the commissioners appointed under the act to detect fraudulent land certificates, and to provide for issuing patents to legal claimants; and the parties suing shall produce the like proof, and be subjected to the requisitions which were necessary, and were prescribed by law, to sustain the original application for the said certificates; and all certificates above referred to, not established or sued upon before the period limited, shall be barred; and the said certificates, and all locations and surveys thereon, shall be forever null and void; and all re-locations made on such surveys shall not be disturbed until the certificates are established, as above directed.