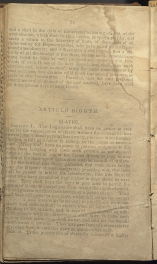 SEC. 1. The legislature shall have no power to pass laws for the emancipation of slaves without the consent of their owners, nor without paying their owners, previous to such emancipation, a full equivalent in money for the slaves so emancipated. They shall have no power to prevent emigrants to this State from bringing with them such persons as are deemed slaves by the laws of any of the United States, so long as any person of the same age or description shall be continued in slavery by the laws of this State: Provided, That such slave be the bona fide property of such emigrants: Provided, also, That laws shall be passed to inhibit the introduction into this State of slaves who have committed high crimes in other States or Territories. They shall have the right to pass laws to permit the owners of slaves to emancipate them, saving the rights of creditors, and preventing them from becoming a public charge. They shall have full power to pass laws which will oblige the owners of slaves to treat them with humanity; to provide for their necessary food and clothing; to abstain from all injuries to them, extending to life or limb; and, in case of their neglect or refusal to comply with the directions of such laws, to have such slave or slaves taken from such owner and sold for the benefit of such owner or owners. They may pass laws to prevent slaves from being brought into this State as merchandise only.

SEC. 2. In the prosecution of slaves for crimes of a higher grade than petit larceny, the legislature shall have no power to deprive them of an impartial trial by a petit jury.

SEC. 3. Any person who shall maliciously dismember, or deprive a slave of life, shall suffer such punishment as would be inflicted in case the like offence had been committed upon a free white person, and on the like proof, except in case of insurrection by such slave.