Preamble - Article I: Bill of Rights

CONSTITUTION OF THE STATE OF TEXAS 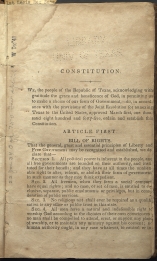 We, the people of the republic of Texas, acknowledging with gratitude the grace and beneficence of God, in permitting us to make a choice of our form of government, do, in accordance with the provisions of the joint resolution for annexing Texas to the United States, approved March first, one thousand eight hundred and forty-five, ordain and establish this constitution.

That the general, great, and essential principles of liberty and free government may be recognised and established, we decare that

SEC. 1. All political power is inherent in the people, and all free governments are founded on their authority, and instituted for their benefit; and they have at all times the unalienable right to alter, reform, or abolish their form of government, in such manner as they may think expedient.

SEC. 2. All freemen, when they form a social compact, have equal rights; and no man or set of men is entitled to exclusive, separate public emoluments or privileges, but in consideration of public services.

SEC. 3. No religious test shall ever be required as qualification to any office or public trust in this State.

SEC. 4. All men have a natural and indefeasible right to worship God according to the dictates of their own consciences; no man shall be compelled to attend, erect, or support any place of worship, or to maintain any ministry against his consent; no human authority ought, in any case whatever, to control or interfere with the rights of conscience in matters of religion; and no preference shall ever be given by law to any religious societies or mode of worship; but it shall be the duty of the legislature to pass such laws as may be necessary to protect every religious denomination in the peaceable enjoyment of their own mode of public worship.

SEC. 6. In prosecutions for the publication of papers investigating the official conduct of officers, or men in a public capacity, or when the matter published is proper for public information, the truth thereof may be given in evidence; and in all indictments for libels, the jury shall have the right to determine the law and the facts, under the direction of the court, as in other cases.

SEC. 7. The people shall be secure in their persons, houses, papers, and possessions, from all unreasonable seizures or searches; and no warrant to search any place, or to seize any person or thing shall issue, without describing them as near as may be; nor without probably cause, supported by oath or affirmation.

SEC. 9. All prisoners shall be bailable by sufficient sureties, unless for capital offences, when the proof is evident, or the presumption great; but this provision shall not be so construed as to prohibit bail after indictment found, upon an examination of the evidence by a judge of the supreme or district court, upon the return of a writ of habeas corpus, returnable in the county where the offence is committed

SEC. 10. The privileges of the writ of habeas corpus shall not be suspended, except when, in case of rebellion or invasion, the public safety may require it.

SEC. 11. Excessive bail shall not be required, nor excessive fines imposed, nor cruel or unusual punishment inflicted. All courts shall be open; and every person, for an injury done him in his lands, goods, person, or reputation, shall have remedy by due course of law.

SEC. 13. Every citizen shall have the right to keep and bear arms in the lawful defence of himself of the State.

SEC. 14. No bill of attainder, Ex post facto law, retroactive law, or any law impairing the obligation of contracts, shall be made; and no person's property shall be taken, or applied to public use, without adequate compensation being made, unless by the consent of such person.

SEC. 17. The military shall, at all times, be subordinate to the civil authority.

SEC. 19. The citizens shall have the right, in a peaceable manner, to assemble together for their common good; and to apply to those invested with the power of government for redress of grievances, or other purposes, by petition, address, or remonstrance.

SEC. 20. No power of suspending laws in this State shall be exercised, except by the legislature or its authority.

SEC. 21. To guard against transgressions of the high powers herein delegated, we declare that every thing in this "bill of rights" is excepted out of the general powers of government, and shall forever remain inviolate; and all laws contrary thereto, or to the following provisions, shall be void. 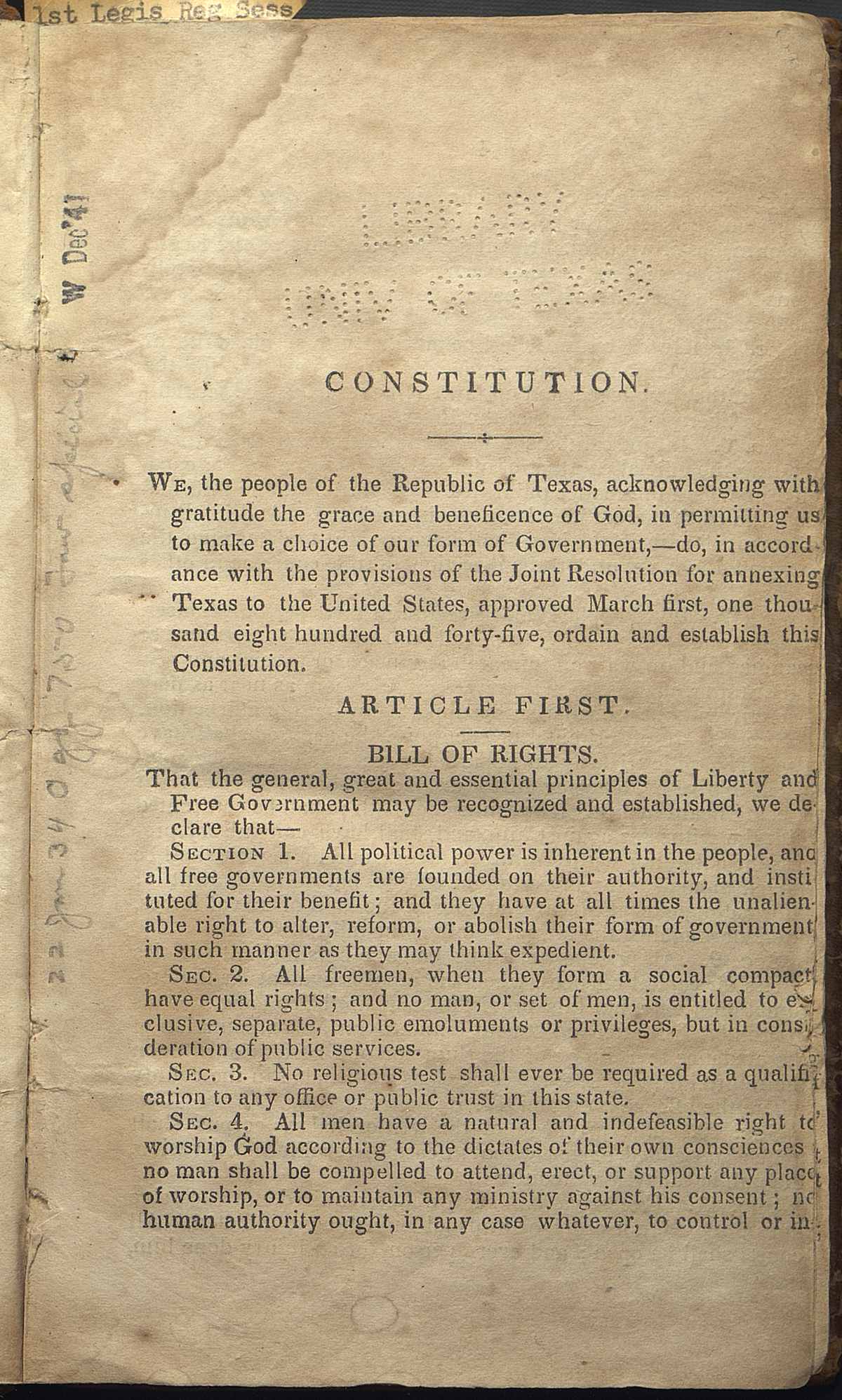 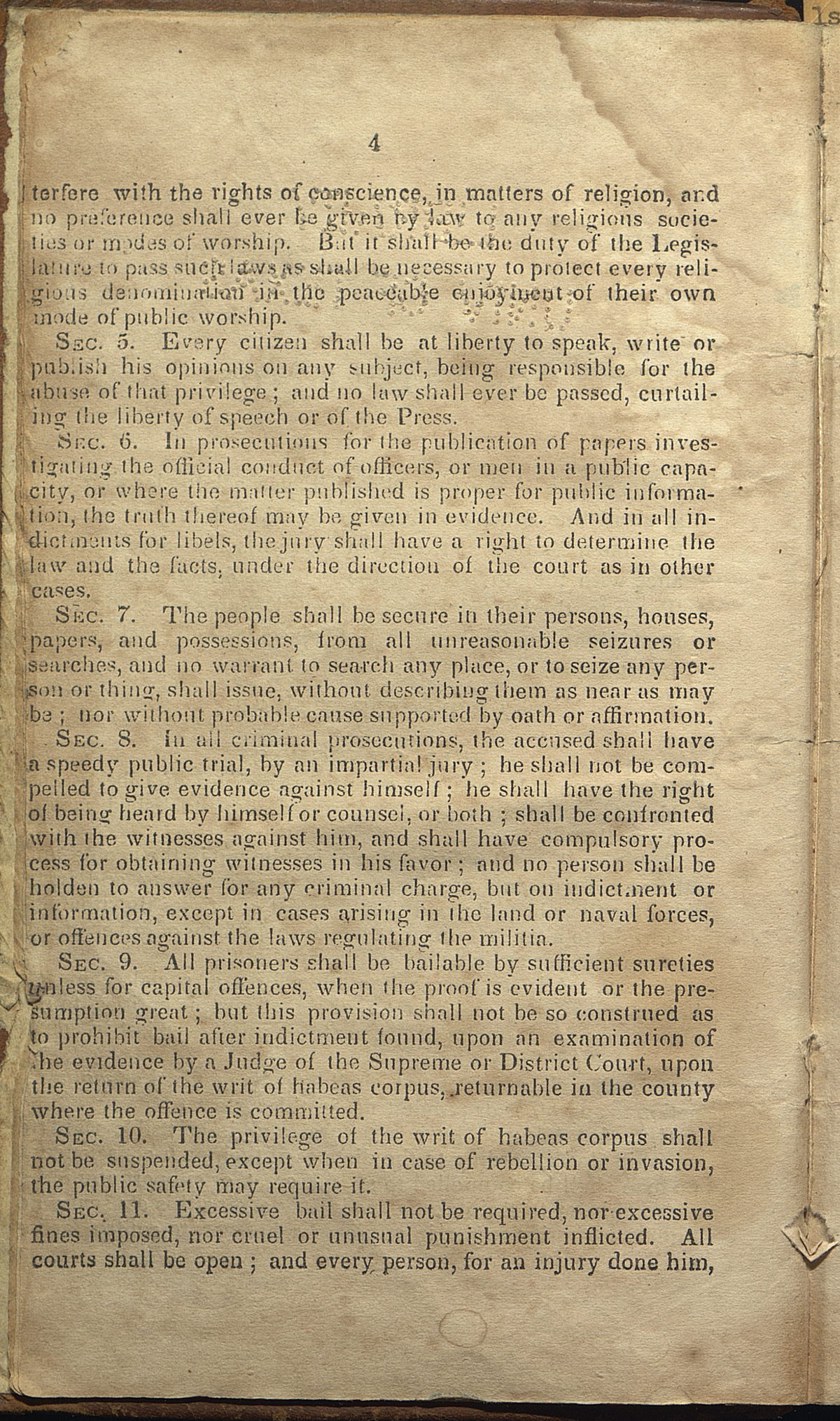 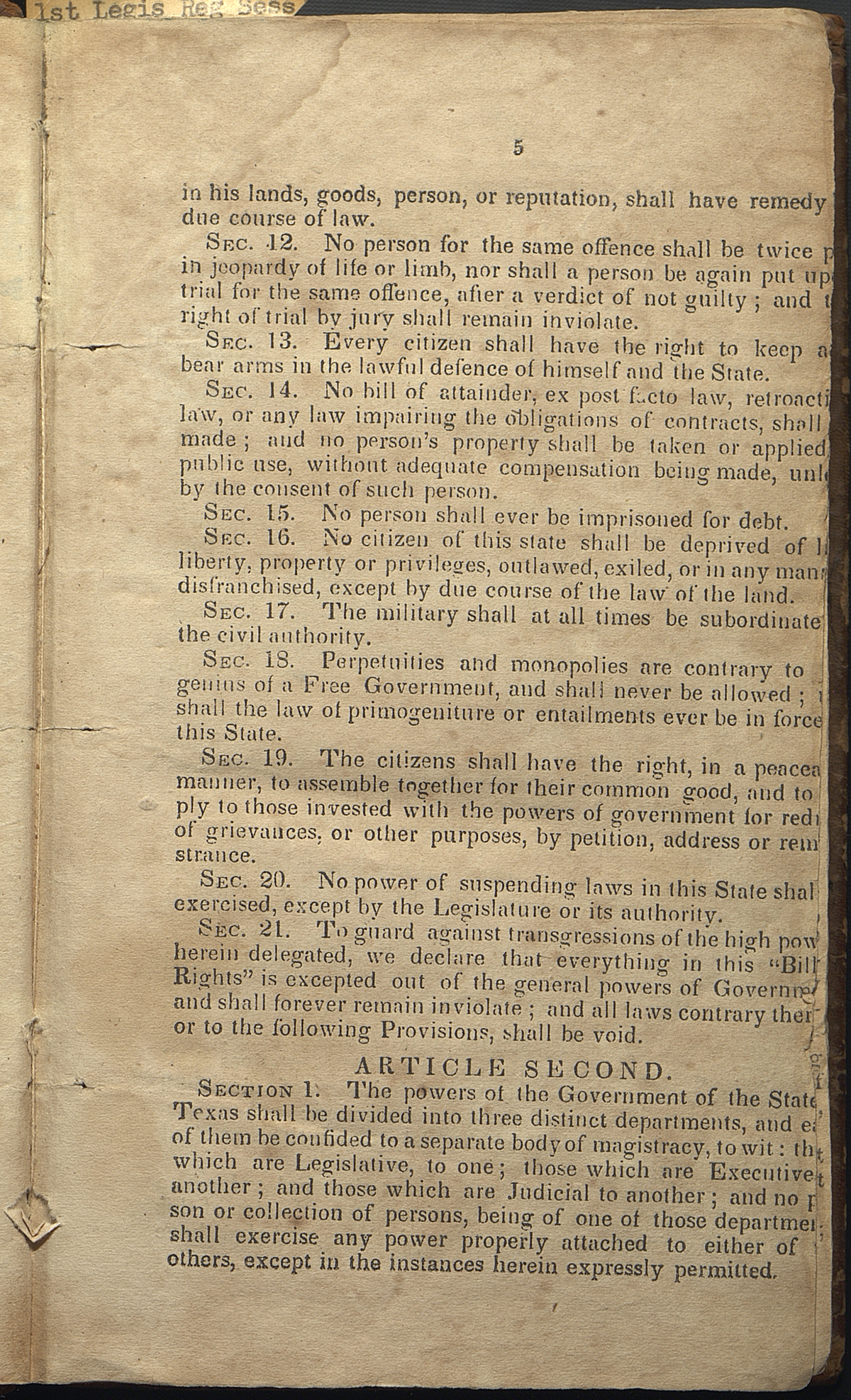