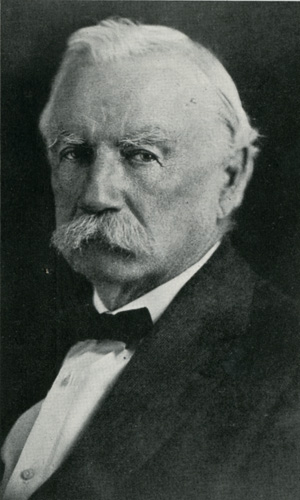 Judge Townes (1852-1923), began his career as a law professor at the University of Texas in 1896.  In 1902 he accepted an appointment as the first dean of the law school, but soon resigned the deanship to focus on teaching.  He again served as dean in 1907, a position he held until his second resignation in 1923.  Several popular legends link aspects of the Sunflower Ceremony to Judge Townes.  While Judge Townes had some part in the creation of the Sunflower Ceremony, the true extent of his involvement is uncertain.

A 1928 article by Mrs. Edgar T. Neal portrays Judge Townes as a central figure in the creation of the Sunflower Ceremony, turning away an agent of a cap and gown company and single-handedly selecting the flower as the official law school regalia.  According to the 1928 story, Judge Townes chose the sunflower because “it keeps its face toward the light, absorbs the impurities of the air and is found all over the world.”  Mrs. Neal, however, does not identify the source of her claims.

Judge Townes’ original quote was likely closer to the words most accounts attribute to him:  “in all latitudes and in every clime, it has the same characteristics—it always keeps its face towards the sun.”  While it is unclear whether Judge Townes was the first to articulate this sentiment, he remains its most famous advocate.