History of the Sunflower Ceremony 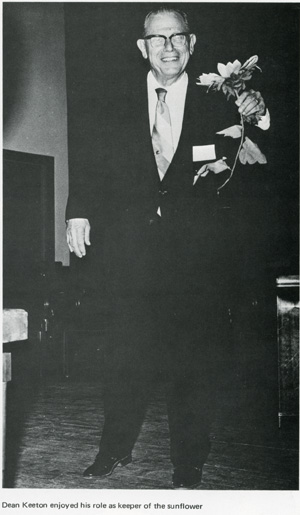 The Sunflower Ceremony is one of the Law School’s oldest traditions.  While the origin and exact date of the first Sunflower Ceremony are uncertain, the practice probably dates to around the turn of the twentieth century.  A report by Judge Townes in 1902 declares that “for the first time in some years the department took part in Class Day at Commencement … We still decline to don the cap and gown, and appear on Commencement Day in our modest sunflower.”

The popular legend surrounding the Ceremony has persisted for decades.  As the story goes, fifteen or so years after the Law School (then the Law Department) was established in 1883, a representative of a cap and gown company came to campus and convinced a committee of faculty and students to rent the regalia for commencement.  Yet no one thought to consult the law students, who were at that time stationed in the basement of the main building.  Resentful at having been left out of the decision, the law students refused to wear the caps and gowns, claiming that they were an inappropriate symbol of professional achievement.  A meeting between faculty and the university president resulted in the decision that the law students must either bend to the will of the rest of the senior class, or wear a “significant, distinct insignia at the exercises.”