Doris Connerly (1897-1987), a 1919 LL.B. graduate of the University of Texas, spent four years practicing law with the Houston firm of Baker, Botts, Parker & 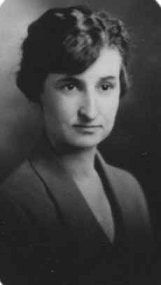 Garwood before returning to the university to serve as law librarian from 1924 until 1926.

As a student, Miss Connerly was a member of Kappa Beta Pi legal sorority and the Ashbel Literary Society. She participated in the Texas Woman's Law Association and served as vice president of the senior laws in the winter term.

Under Miss Connerly's direction, the library purchased 1,119 original English Reports from Carswell & Company and exchanges were made for state reports, session laws, and bar association reports of a number of states. A donation by R. W. Mayo, a 1900 graduate of the law department, provided funds for a collection on insurance law. With the growing popularity of law reviews (the Texas Law Review was founded in 1922) racks were filled with the fifteen to twenty most recent law reviews to "familiarize students with the make-up of different law reviews and to encourage the voluntary reading of articles and comments on current topics."