Patience: “Patience is the Chiefest fruite of study; a man by striving to make himself a different thing from other men by much reading, gaines the chiefest good, that in all fortunes hee has something to entertaine & comfort himself withall.” Table-Talk.

Selden was born in Sussex into a landed family of moderate wealth. 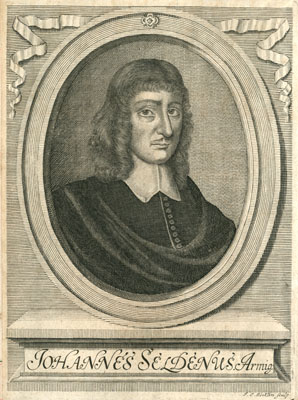 Although beginning at the age of sixteen he studied at Oxford University, his education did not really begin until he started studying law in London in 1602. Following the pattern of the time, he first entered Clifford’s Inn for his initial training as a barrister before joining the Inner Temple, one of the four Inns of Court. Once he began to practice law, Selden specialized in conveyancing, the transfer of property and titles. By the time he was called to the bar in 1612, Selden was already the author of multiple works and his course as a predominantly legal scholar was set.

Moving to London proved critical to Selden’s development. It was here that he met the leading lights of the era who became his instructors, patrons, and protectors. Selden took advantage of the intellectual wealth and began to study the law’s intersection with other fields. The languages of the works referred to in his writings give a sense of the breadth of his erudition: Arabic, Aramaic, Chaldean, Ethiopic, French, German, Greek, Hebrew, Italian, Latin, Old English, Persian, Samaritan, and Spanish. Patrons such as Sir Henry and Lady Elizabeth Grey, the future Earl and Countess of Kent, and reknowned antiquarian Sir Robert Cotton secured him a steady living and access to extensive libraries over the years. And when his scholarship sparked controversy, his friends interceded on his behalf to protect him from the authorities.

Selden accomplished all this largely without leaving England, or even London, prompting his friend Ben Jonson, a leading poet of the day, to write of him:

Stand forth my object, then, you that have been
Ever at home, yet have all countries seen;
And, like a compass, keeping one foot still
Upon your centre, do your circle fill
Of general knowledge; watched men, manners too,
Heard what times past have said, seen what ours do. . .
What fables you have vexed! What truth redeemed!
Antiquities searched! Opinions disesteemed!
Impostures branded, and authorities urged!
What blots and errors have you watched and purged
Records and authors of! How rectified
Times, manners, customs! Innovations spied! . . .

His impressive scholarly output meant that he spent much of his time reading and writing. It would be wrong, however, to suppose that Selden isolated himself in an ivory tower. Quite the reverse in fact—Selden played such an active part in the constitutional power struggles of the day that he wound up imprisoned twice in another tower altogether, the Tower of London. Ironically, toward the end of his life, Selden's scholarship was held in such high esteem that Parliament appointed him keeper of the records in the Tower.

Selden lived through one of the most tumultuous periods of English history. Born midway through the reign of Elizabeth I, often regarded as England’s golden age, Selden rose to prominence during the more contentious rules of the early Stuarts, James I and his son Charles I. Selden survived the Civil War that began with the execution of Charles I, through the interregnum, dying just a few years before the Restoration under Charles II in 1660. In spite of the vicissitudes of his own era, Selden’s reputation as a legal scholar has endured. Today, his work continues to offer insight into the development of the law while his personal example as a lawyer and scholar continues to inspire.