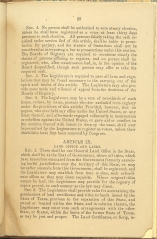 SECTION 1. There shall be one General Land Office in the State, which shall be at the Seat of Government, where all titles, which have heretofore emanated from the Government formerly exercising lawful jurisdiction over the territory of this State, or may hereafter emanate from this Government, shall be registered; and the Legislature may establish from time to time, such subordinate offices as they may deem requisite. Where original titles cannot be had, the Legislature may provide for the registry of copies proved, in such manner as the law may direct.

SEC. 2. The Legislature shall provide rules for ascertaining the genuineness of land certificates and titles to lands issued by the State of Texas, previous to the separation of this State, and owned or located within this State, and in relation thereto, the Legislature may enter into such arrangements with the other State, or States, within the limits of the former State of Texas, as may be just and proper. The Land Certificates, or Scrip, issued by the (so-called) authorities of the State of Texas during the late rebellion, are declared null and void; Provided, that where any of these Certificates, or Scrip, are now owned in quantities of six hundred and forty acres or less, by any actual settler on the public lands of this State, the same shall be considered valid.

SEC. 3. Immigrants to this State, from Europe and elsewhere, as well as residents of this State, who may settle on any part of the public lands of this State, shall be entitled to a portion of such land, as follows: Every head of a family, whether male or female, shall have one hundred and sixty acres; and every male person over the age of eighteen years, shall have eighty acres of the public lands. The only conditions attached to this donation, shall be, that each applicant for the same shall pay all expenses of survey thereof, and make such proof as the Legislature may require, that he or she has resided on the land to be donated, for three years preceding the issuance of the patent.