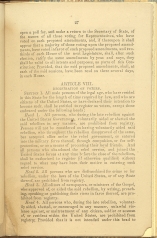 SECTION 1. All male persons of the legal age, who have resided in this State for the length of time required by law, and who are citizens of the United States, or have declared their intention to become such, shall be entitled to register as voters, except those embraced under the following heads:

Head 1. All persons, who during the late rebellion against the United States Government, voluntarily aided or abetted the said rebellion in any manner, are prohibited from registry. Persons will not be considered as having voluntarily aided said rebellion, who throughout the rebellion disapproved of the same, but accepted office under the rebel government, or entered into the military force thereof, through compulsion, or for self-protection, or as a means of protecting their loyal friends. And all persons who abandoned the rebel service, and joined the United States forces at any time before the close of the rebellion, shall be authorized to register (if otherwise qualified) without regard to what may have been their motive in entering such rebel service.

Head 2. All persons who are disfranchised for crime or for rebellion, under the laws of the United States, or of any State thereof, are prohibited from registry.

Head 3. All editors of newspapers, or ministers of the Gospel, who approved of, or aided the said rebellion, by writing, preaching, speaking or publishing their views in favor thereof, are prohibited from registry.

Head 4. All persons who, during the late rebellion, voluntarily aided, abetted, or encouraged in any manner, unlawful violence against, or maltreatment of any citizen, soldier or seaman of, or resident within the United States, are prohibited from registry; Provided that it is not intended under this head to exclude those persons, who, (though serving in the rebel military force) carried on warfare according to the rules of civilized nations, unless such persons are excluded under some other head of this section.

Head 5. All persons who since the close of the said rebellion have continued as members of, or have become members of any secret organization designed in hostility to the United States, or the loyal people thereof, and known as "Sons of the South," or "Ku Klux Klan," or by any other name, are prohibited from registry; Provided, however, that all persons who are registered as voters under the reconstruction acts of Congress previous to voting on this Constitution, and who may vote for the adoption thereof, when the same is submitted to the people, shall be entitled to register (if otherwise qualified) though they may be excluded under the terms of any one of the foregoing heads.

SEC. 2. The following oath or affirmation shall be taken by all persons offering to register as voters: "I, [A. B.} do solemnly swear in the presence of Almighty God, (or affirm) that I am a citizen of the United States, (or that I have declared my intention in the manner prescribed by law, to become a citizen of the United States) that I have resided in this State and county the length of time previous to registry, required by the Constitution of this State. That I am not disfranchised, or excluded from the right to register as a voter, by reason of disqualification under the provisions of any of the heads of section 1st of this article, of the Constitution of this State, (or, that I, though excluded from registry under the terms of section 1st of this article of the Constitution of this State, did, at the election held on the question of the adoption of this Constitution, vote for the adoption of the same, I being at the time a registered voter under the reconstruction acts of Congress.) And I further swear (or affirm,) that I will faithfully support the Constitution and obey the laws of the United States and of this State, and will, to the best of my ability, encourage others so to do, and that I am in favor of equal civil and political rights for all human beings. So help me God."

SEC. 3. The County Court of each county shall be the Board of Registry of the county, and shall sit for this purpose at such times as the Legislature may direct. The County Clerk shall keep a public registry of the voters, setting forth briefly the grounds of admission or rejection of the applicant for registry; and shall also keep a record of the oath (or affirmation) made by each registered voter. The County Clerk and the County Court shall receive such compensation for their services in this respect as may be fixed by law.

SEC. 4. No person shall be authorized to vote at any election, unless he shall have registered as a voter at least thirty days previous to such election. All persons falsely taking the oath required under section 2nd of this article, shall be liable to prosecution for perjury, and the statute of limitations shall not be considered as interposing a bar to prosecutions under this section. The Boards of Registry are required to scrutinize closely the claims of persons offering to register, and no person shall be registered, who, after examination had, is, in the opinion of the Board disqualified, though such person may offer to take the required oath.

SEC. 5. The Legislature is required to pass all laws and regulations that may be found necessary to the carrying out of the spirit and intent of this article. The Legislature may also provide some mode and tribunal of appeal from the decisions of the Boards of Registry.

SEC. 6. The Legislature may by a vote of two-thirds of each house, relieve, by name, persons who are excluded from registry under the provisions of this article; Provided, however, that no person, who ever held any office under the United States, or any State thereof, and afterwards engaged voluntarily in insurrection or rebellion against the United States, or gave aid or comfort to the enemies thereof with intent to destroy the same, shall ever be permitted by the Legislature to register as voters, unless their disabilities have first been removed by Congress.