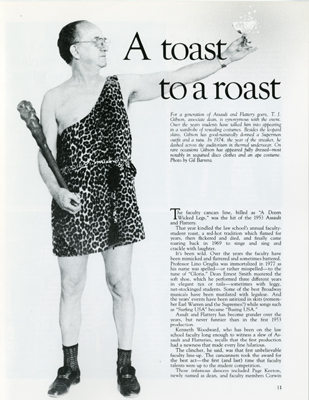 While other faculty such as Dean Page Keeton were heavily involved with Assault & Flattery, T. J. Gibson approached the performances with extraordinary gusto and a willingness to do just about anything, so long as it was funny. According to a 1979 Townes Hall Notes article titled “A Toast to a Roast,” Gibson was “synonymous with the event.” 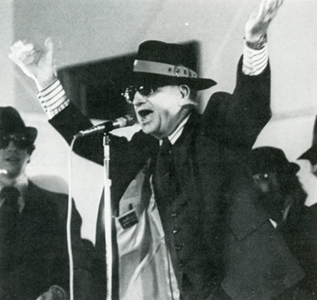 For the sake of the show, T. J. Gibson donned an array of ridiculous costumes, including leopard skins, a superman outfit, thermal underwear (to play a streaker in 1974), a tutu, an ape costume and even sequined disco clothes with the words “Disco Stud” emblazoned on the back. In recognition of his good-natured efforts the Student Bar Association dedicated the 1984 Assault & Flattery in his honor. Additionally, the SBA dedicated Law Week to T. J. Gibson twice, in 1982 and as a shared honor with Dean John F. Sutton, Jr. in 1984.