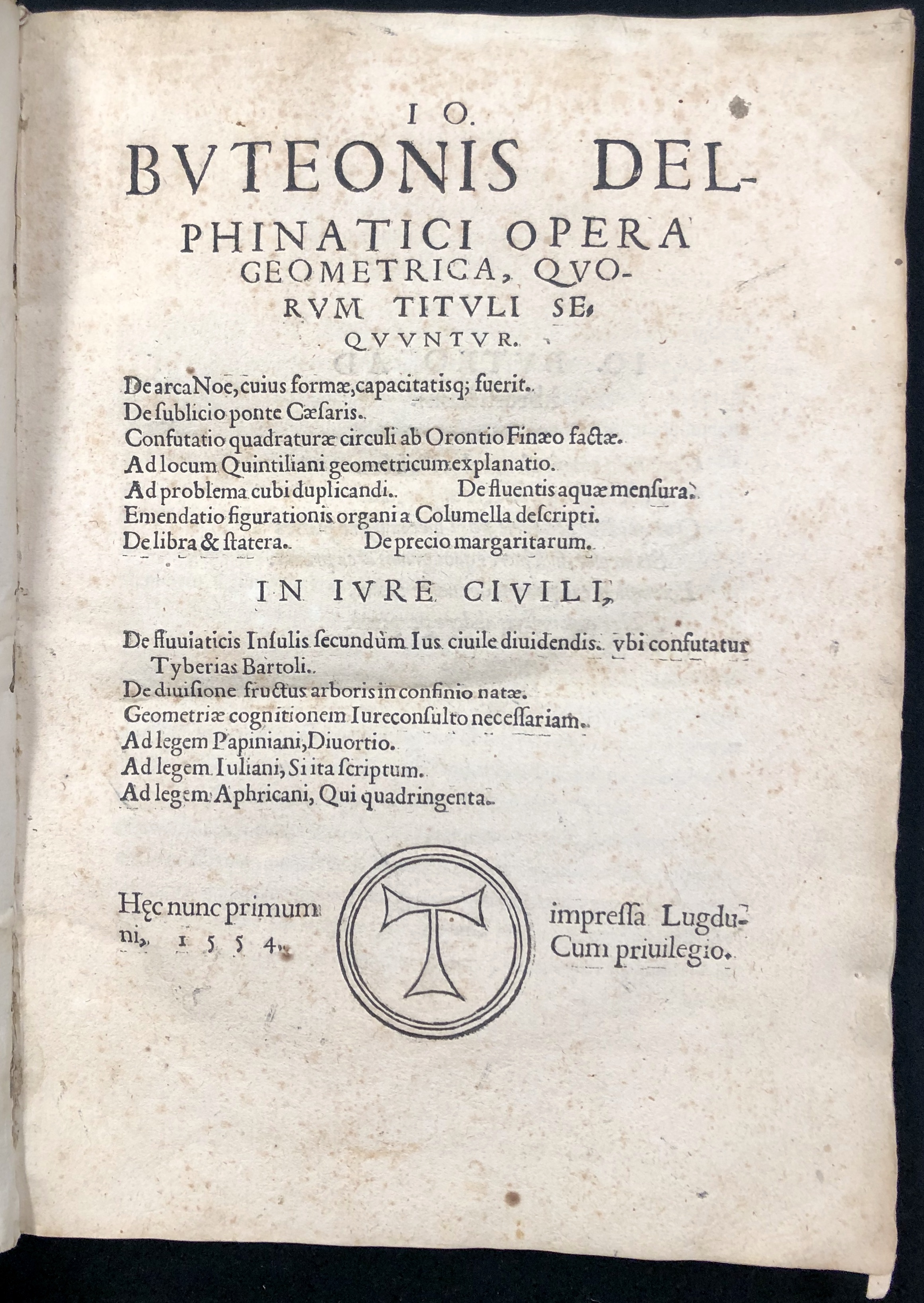 A sixteenth century collection of mathematical treatises by an French monk might at first seem to be out of place in a law library's rare books collection.

In fact, Jean Borrel's Opera Geometrica was among the first works to apply mathematical theories to legal practice.

The heading "In Jure Civili," in the center of the title page to the left, precedes the sections of the work Borrel thought particularly applicable to civil law.

The work goes on to outline the knowledge of arithmetic and geometry Borrel thought any competent lawyer would need to master.

The work is divided into fifteen sections, ranging widely in topic.

The first sections of the work focus on geometry applied to ancient history; for instance Borrel demonstrates his findings for the exact measurements of Noah's Ark and Caesars' Bridge.

In the final section, Borrel deals with mathematical aspects of jurisprudence, such as division of land and inheritances.

He devotes one section to challenging the writings of Bartolus de Saxoferrato, the renowned 14th century jurist and one of the first authors to have explored the legal status of rivers.

The illustration on the left depicts Borrel's just geometrical division of an island born in the middle of a river between landowners on both sides. Bartolus wrote his tract on river law, Tiberiadis, in 1355; 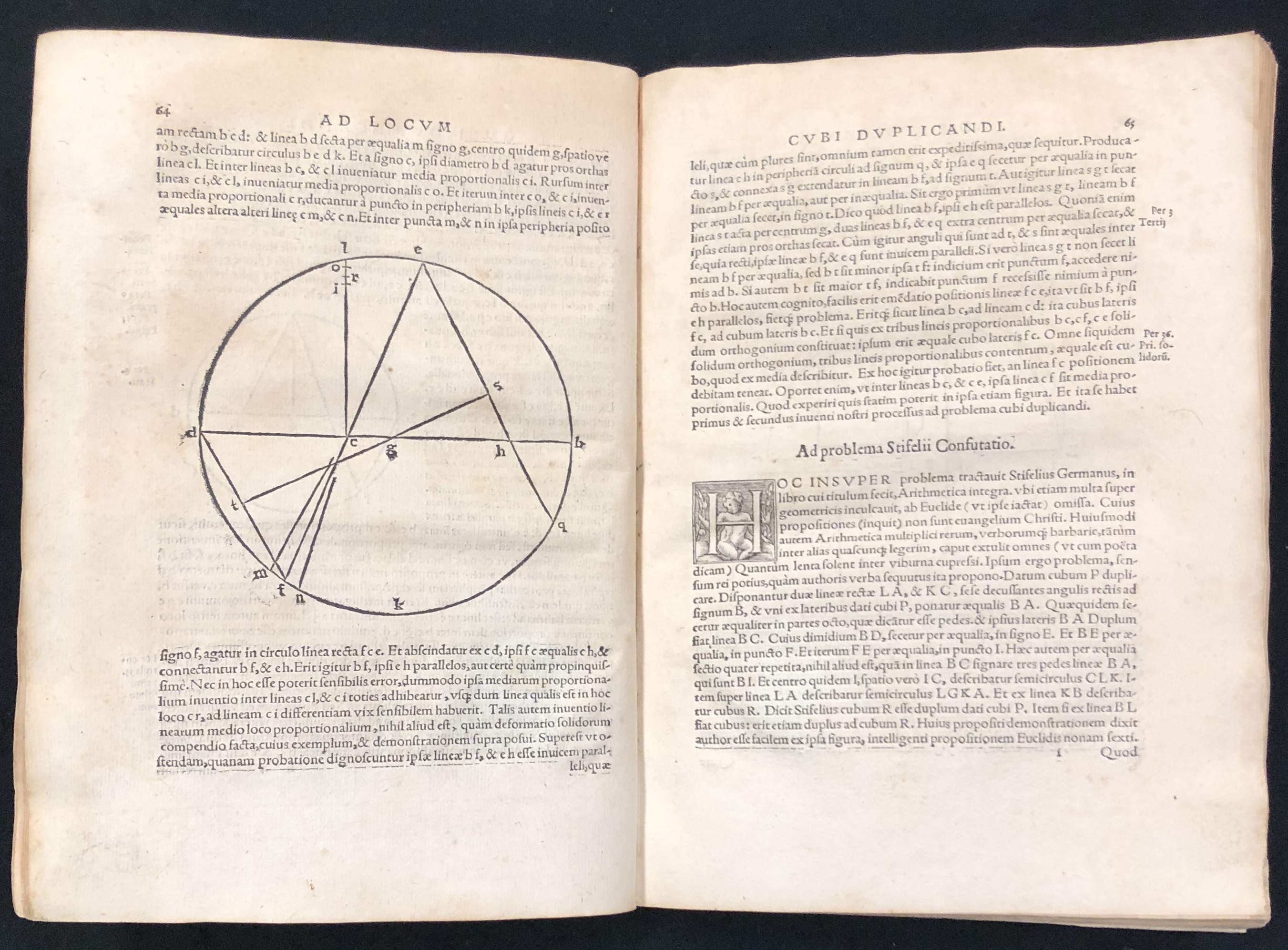 it is thought to be the first application of Euclidean geometry to legal discourse. Borrel took the same interdisciplinary approach in his argument, with geometrical figures and diagrams meant to illustrate his principles throughout the work.

Jean Borrel, (b. ca. 1492, d. ca 1564-1572), often known as Buteo, was a brother of the Order of St. Anthony in Dauphiné, France. Borrel entered monastic life as a young man. When his gift for languages and math became apparent, he was sent to study in Paris under the mathematician Oronce Finé. 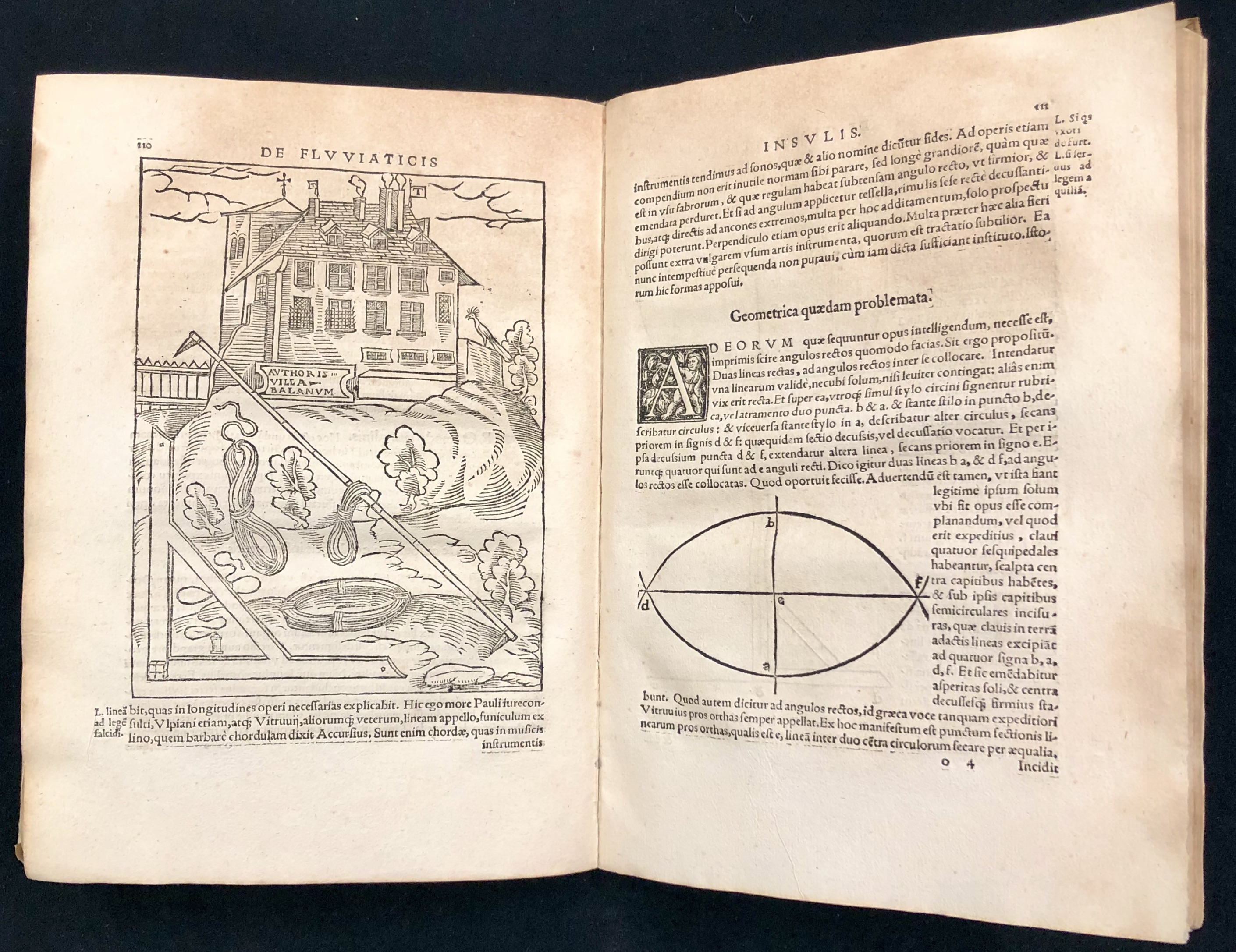 He returned to the Order after six years but did not publish until much later in his life. Apparently a solitary man, Borrel was not hesitant to criticize his contemporaries and devoted significant effort to argue against the theories of his former teacher and other renowned jurists and mathematicians. The illustration on the right depicts Borrel's villa, which he has labeled Balanum. After Opera Geometrica, Borrel wrote his most well known work, an algebraic text called Logistica, in 1559. Over the next decade he continued to write on mechanical and mathematical subjects, until he was forced into exile during the Wars of Religion.

Thomas Bertheau, the printer of Tarlton's Opera Geometrica, was a prolific Lyon printer with the Compagnie des Libraires, a powerful sixteenth century publishing cooperative in Lyon. 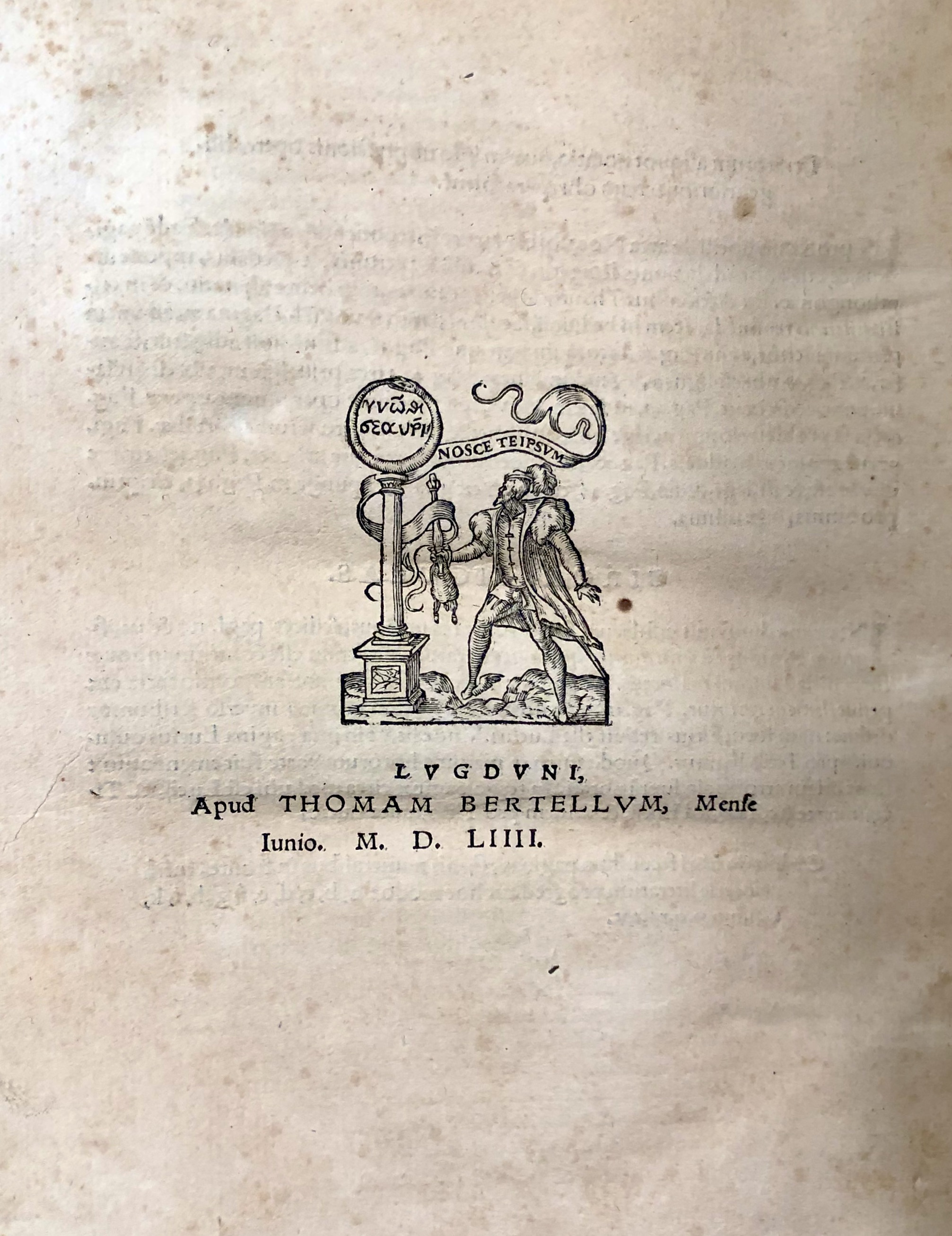 Bertheau was most active between 1545 and 1556. He printed primarily works of Roman and Canon law, as well as commentaries and consillia by the renowned jurists and lecturers of both laws. The printer's mark from Opera Geometrica is shown in the image to the left.

The mid-sixteenth century saw a number of new mathematical treatises published in France, Jean Borrel's among them. Thomas Bertheau, who previously specialized in legal editions, at first does not seem like a good fit for Borrel's technical work, which required a number of precise woodcut illustrations interspersed throughout the text. However, given Borrel's interest in applying geometrical concepts to the practice of Roman law, and within the context of printers active within the powerful merchant publishing Compagnie des Libraires, Bertheau is a more understandable choice of printer.

In any case, Opera Geometrica became part of the great rise in legal printing in sixteenth century Lyon and today continues to illustrate an interdisciplinary approach to legal scholarship. Please stop by the Tarlton Rare Books Room to visit this volume in person!