An Italian Incunable in Tarlton's Collection

Among the earliest printed books in Tarlton’s collection are a dozen incunables. The term incunable comes from the Latin word for “cradle” or "swaddling clothes" and in book history it has come to refer to those books dating from infancy of printing in Europe, before 1501.

This sammelband of the lectures of Baldus de Ubaldis is a volume of four incunable editions. A sammelband is a collection of texts printed separately and later bound together. These texts were printed in 1486, 1495, and 1496, in Venice and Pavia. 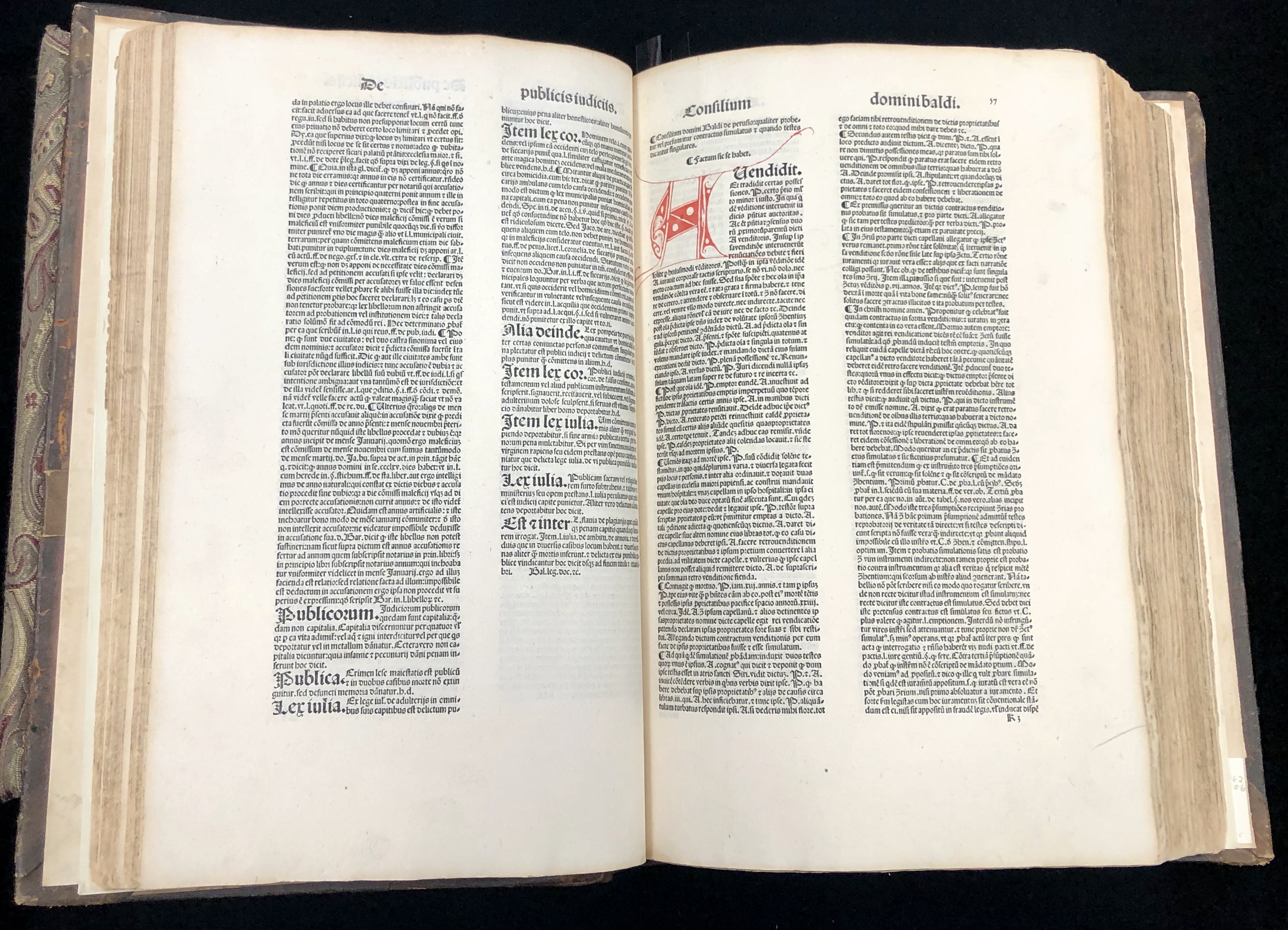 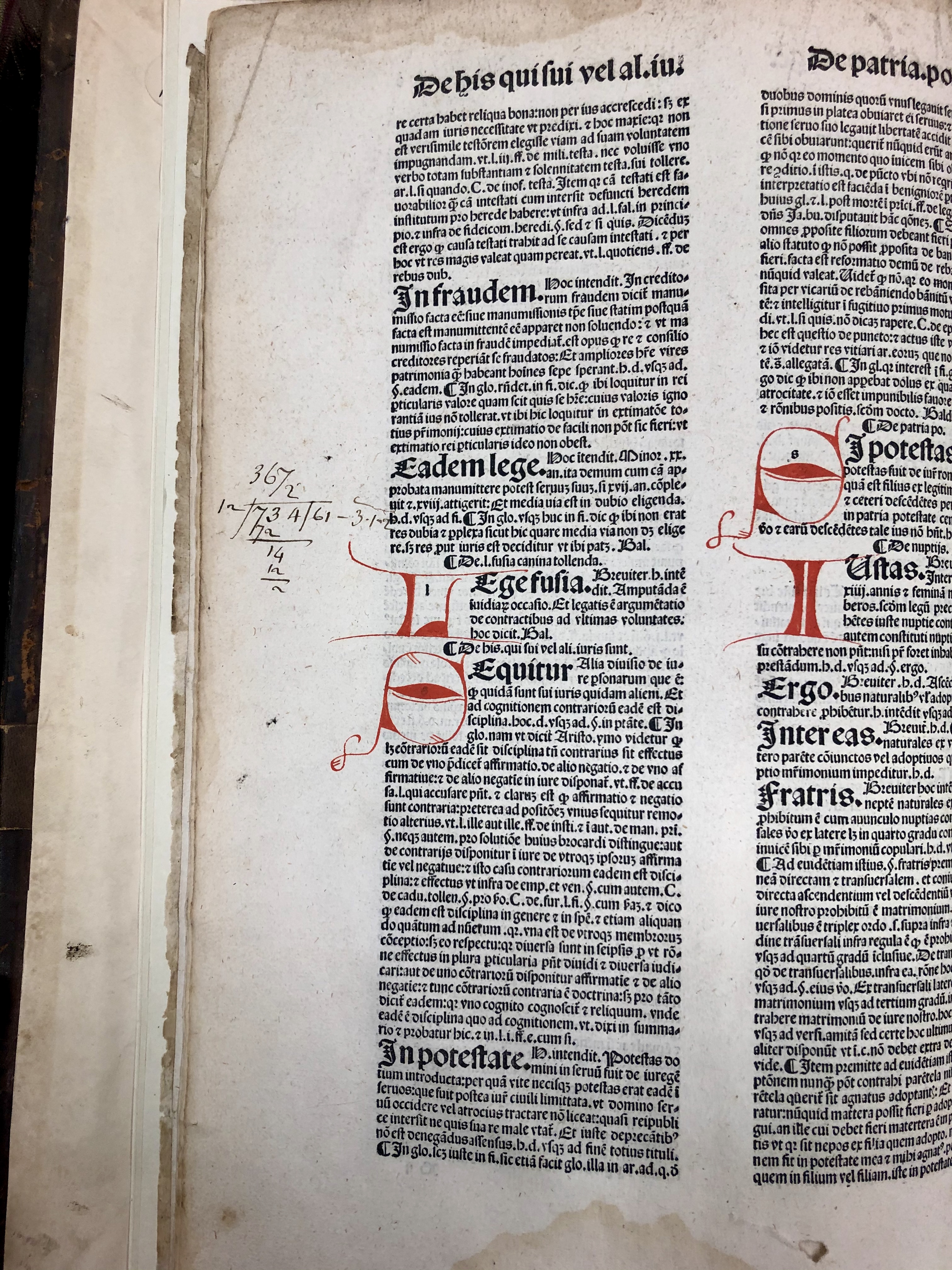 Baldus de Ubaldis (1327-1400) was an Italian jurist, and a leading figure in medieval Roman law. He was known as the greatest consulting counsel of his time. As a doctor and professor of civil law he taught Pope Gregory XI and Pope Urban VI, who called him to Rome as a legal consultant on the church schism.

Baldus is best known now for his writings on the law of evidence and the law of procedure, which remained the standard scholarship for centuries. However, in his day he was the noted expert on the Corpus Juris Civilis, the 6th century codification of Roman law, compiled under Justinian I, and the basis for the study of Roman law in medieval universities. Baldus was renowned for his lectures on the Corpus Juris, which drew crowds of tourists as well as students. Baldus pioneered a systematic division and treatment of the Corpus Juris, concentrating on portions that were of practical use in his time.

Legal texts like this collection of Baldus' lectures were among the earliest works to be printed; Tarlton’s collection of incunables is valuable to researchers in terms of its content, but the bindings, inscriptions, annotations, manuscript fragments and decorations, indeed every aspect of the book as a material object, can also lend valuable insight into the study of legal history and early printing.

Sammelbands like this one are also interesting as they tell the history not only of the production of the books but also the reading practices of their users. For instance, at some point a reader of this Baldus text took a break from studying Roman law to work out a bit of long division on a handy margin.

As the spread of printing to Renaissance Italy from Germany in the 1460s made books more widely available and accessible, authors and printers adapted to a new market with new reader-friendly technologies, such as running titles along the top of pages, indexes, and other changes to the layout of the text visible in these editions. The format of the book familiar to modern readers is largely a result of these innovations.

Tarlton's Baldus sammelband shows the work of several of these innovative printers.

Andreas Torresani, the printer of the second text in the collection, acquired his training and type from Nicholas Jenson, and in 1503 Torresani entered a partnership with Aldus Manutius, founder of the great Aldine Press.

Between 1484 and 1488 Giovanni and Gregorio Gregorii, the printers of the first and last texts of Tarlton's Baldus sammelband, published almost exclusively legal titles, with particular attention to the production of the Paduan scholars of the 14th and 15th centuries. Gregorio, a talented engraver, went on to publish the first illustrated medical book.

The woven basket is one of the printer's marks used by Leonardus Gerla, seen to the right in a colophon dated 1497. The colophon tells the user of this text when and where it was printed, like a modern title page.

Gerla was a Pavian printer specializing in law texts and active through the 1490s; he printed various works by Baldus de Ubaldis as well as other Roman and canon law jurists.

Baldus' Super usibus feodorum, his most influential and often reprinted work, is a commentary on twelfth century feudal law. It is the third text in Tarlton's Baldus sammelband.

For more information on Baldus de Ubaldis or early Italian printing, the following resources are helpful. Please stop by the Tarlton Rare Books Room to view explore our incunable collection in person.

The Incunabula Short Title Catalogue is the international database of 15th-century European printing created by the British Library with contributions from institutions worldwide.

15th Century Booktrade is a project at the University of Oxford to use the material evidence from surviving incunabula to learn more about the distribution and use of printed books and reading practices in the second half of the fifteenth century.