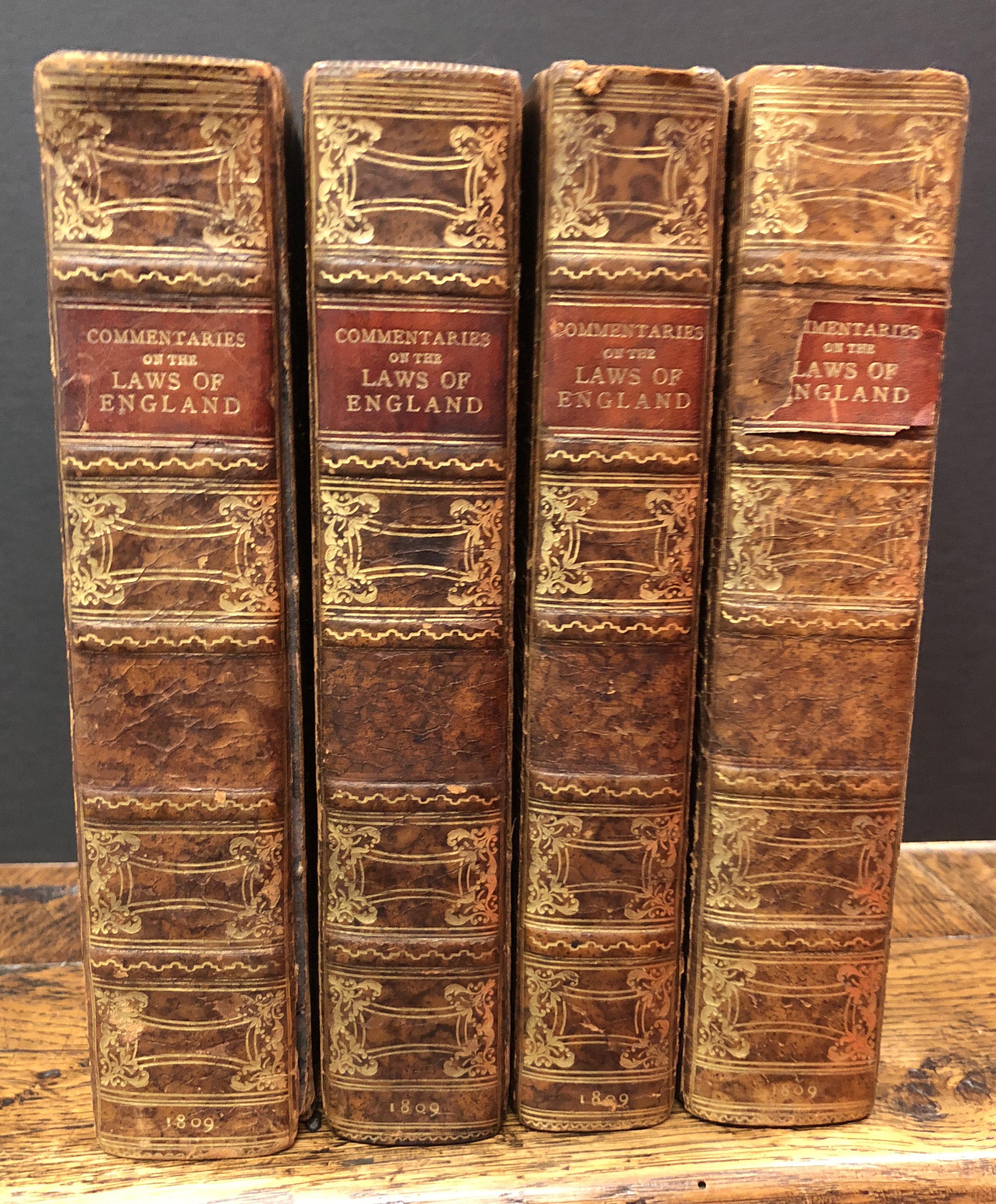 William Blackstone, one of the best known and most influential legal minds of the 18th century, had a relatively unpromising start in life. He was born to a middle-class London family in 1723 and orphaned by age twelve. He was educated, with the help of his uncle, Thomas Bigg, first at the Charterhouse School in Surrey, and later at Pembroke College, Oxford. Blackstone was admitted to the Bar in 1746 and began a largely unsuccessful career as a barrister. Blackstone was not an adept legal practitioner, and described his brief experience of the profession as being against both his “inclinations, and a thing called principle.”

In 1750 Blackstone retired from practice to teach law, beginning work on the lectures that would eventually become his Commentaries on the Laws of England, a work both foundational to the study of the common law system and inspirational to the founders of the United States.

Blackstone described the intent of his lectures in a 1753 advertisement:

“It is proposed to lay down a general and comprehensive Plan of the Laws of England; to deduce their History; to enforce and illustrate their leading Rules and fundamental Principles; and to compare them with the Laws of Nature and of other Nations.”

Blackstone's lectures, the first lectures on English law ever delivered in a university, were an immediate success; they were published as the Commentaries on the Laws of England between 1765 and 1769. The Commentaries were translated into French, German and Russian, and the American edition published in Philadelphia in 1771 sold out its first printing. Blackstone’s systematic, clear, and comprehensive description of the English common law system earned the Commentaries a place as the foundational text of university legal education, a position it held for centuries. 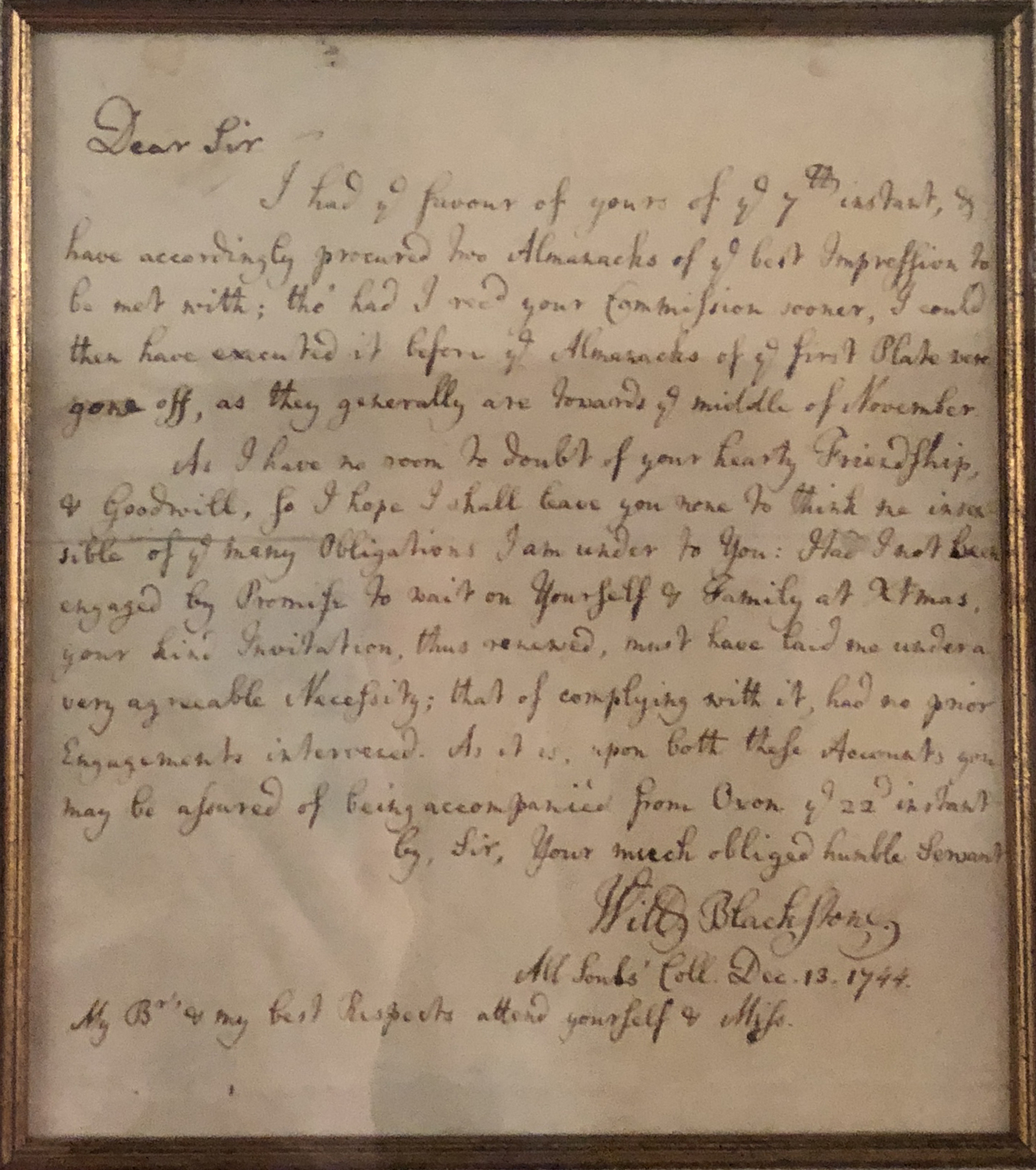 Blackstone argued that the laws of people were like scientific laws, divinely created and only awaiting discovery, as Isaac Newton had discovered the laws of gravity. He declared that there were "certain immutable laws of human nature,” and that God gave humanity "the faculty of reason to discover the purport of those laws." Blackstone’s arguments are familiar to American students today because they were so influential in the construction of the Declaration of Independence and the Constitution. The Declaration’s indictment against the Crown contains many of the absolute rights of individuals outlined by Blackstone, including the prohibition of taxation without consent. The Commentaries remained the chief resource on English law, as well as its primary teacher, in America for a century; the introductory texts for generations of lawyers.

Derek R. Van Gilder, Law '81, gifted the library with an 1809 edition of Commentaries on the Laws of England and a 1744 letter written by Blackstone. 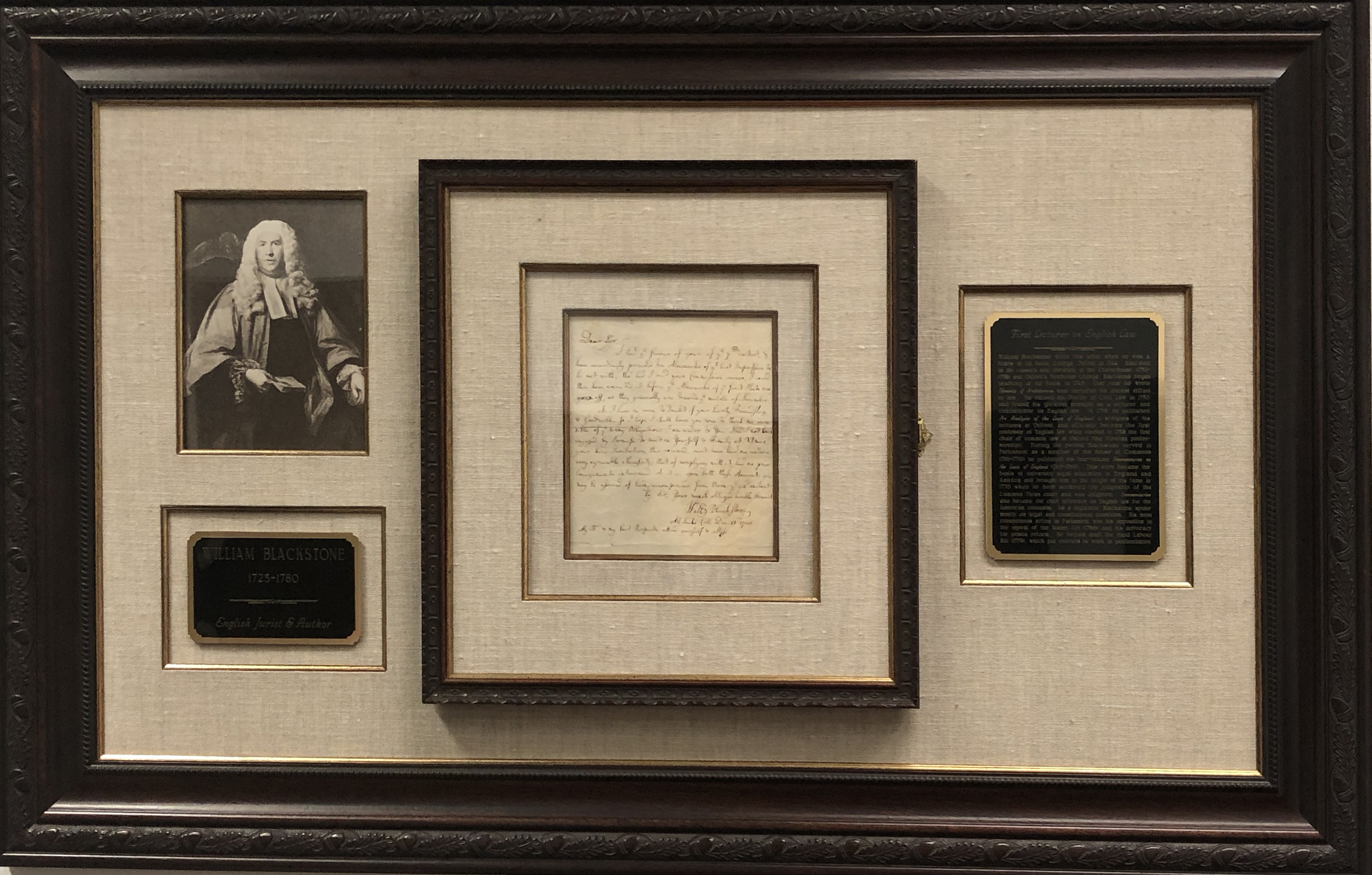 The 1744 letter was written by Blackstone while he was a fellow at All Soul's College, Oxford to his uncle, Seymour Richmond, an attorney. One of the earliest known letters written by Blackstone, it says little about his life at Oxford but suggests a warm relationship with his extended family. It is likely that Richmond encouraged Blackstone to pursue a legal career, and provided moral and practical support for Blackstone's education.

The gift of these early volumes of Blackstone’s Commentaries, as well as the treasure of a letter in his own hand, will allow students at the University Of Texas School Of Law to encounter this eminent legal scholar in a unique and remarkable way. Please visit the Special Collections Reading Room of Tarlton Law Library to view the beautifully mounted Blackstone letter and the Commentaries volumes.