The Report of the New York State Woman Suffrage Association, Twenty-Sixth Annual Convention is a compilation of the speeches, committee hearings, statistical research, and petition signatures gathered in the suffragist effort preceding, during, and following the New York State Constitutional Convention of 1894. Inscribed by Susan B. Anthony on the front cover, it is a landmark publication in the history of woman’s suffrage and a rare and valuable addition to Tarlton’s collection. 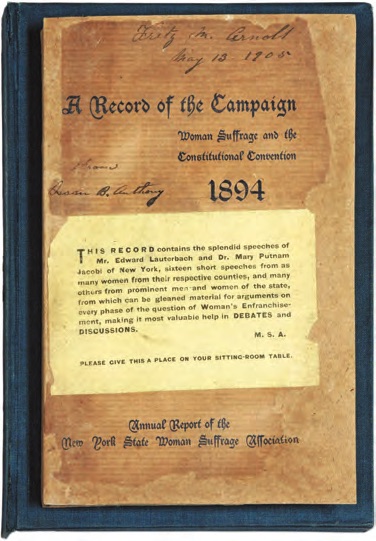 In preparation for the New York State Constitutional Convention, the New York Woman Suffrage Association members organized a campaign, holding mass meetings in every New York county and securing 600,000 signatures out of a state population of roughly 2,500,000. The campaign’s committee worked out of the Rochester, New York home of Susan B. Anthony and her sister, Mary Anthony, the campaign’s corresponding secretary. 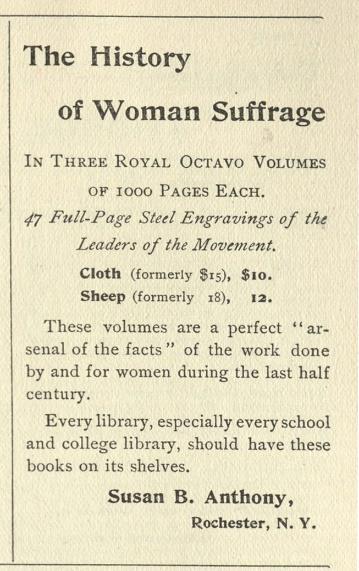 Campaign work documented in the Report includes a collection of statistics showing women’s responsibility as taxpayers in the state. “Taxation without representation” was an argument the suffragists felt would be convincing because their gathered statistics indicated women property holders paid taxes amounting to over $348 million.

In May 1894, the president of the New York State Constitutional Convention appointed a committee in charge of suffrage amendments. Susan B. Anthony and Jean Brooks Greenleaf, president of the New York State Woman Suffrage Association, spoke to that committee on May 24, 1984. Despite the suffragists’ efforts, the petitions and committee hearings failed to bring about a suffrage amendment to the 1894 constitution.

Their campaign laid the groundwork for future suffrage efforts and was eventually rewarded in the passage of the 19th amendment to the U.S. Constitution ratified 100 years ago in August of 1920.

Tarlton's copy of the Report of the New York State Woman Suffrage Association, Twenty-Sixth Annual Convention was provided in honor of Professor Jenni Parrish in appreciation of her continued support of the Tarlton Law Library.