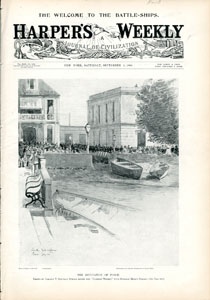 Harper’s impression is the first published version of the Last Will. Although the work shortly became closely associated with the holiday season, originally Fish conceived of it as a late summer piece. Harper's Weekly: A Journal of Civilization was an American political magazine published by Harper & Brothers from 1857 until 1916, featuring foreign and domestic news, fiction, essays on many subjects, and humor.

[Williston Fish.] The Will of Charles Lounsbury. Boston: The Merrymount Press, 1907. 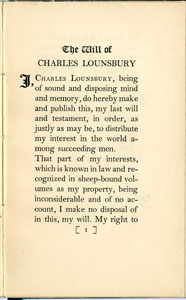 The Merrymount Press edition took significant liberties with the original text and failed to acknowledge the author, inspiring a tirade by Fish. The press issued a revised and author approved edition the following year.

The Merrymount Press was a printing company founded and run by Daniel Berkeley Updike (1860-1941) in Boston, Massachusetts, from 1893 through 1941. Among the best representatives of the Arts and Crafts movement in American book arts, Merrymount Press was additionally the first American firm to use the Times New Roman font.

In this edition, Williston Fish rather crossly recounts the unfortunate history of his short text as an introduction to the “author approved” version. Since it is difficult to do justice to the combination of annoyance and humor, a portion of the text is reproduced here:

I wrote "A Last Will" in 1897. It was published first in Harper's Weekly in 1898. Shortly afterwards it began to appear in a sporadic way in the newspapers. Whenever a newspaper did not have at hand what it really wanted, which was a piece entitled “Reunion of Brothers Separated for Fifty Years,” or Marriage Customs Among the Natives of the Fricassee islands,” it would run in this piece of mine. In return for the free use of the piece, the paper, not to be outdone in liberality, would generally correct and change it, and fix it up, often in the most beautiful manner; so that I am forced to believe that nearly every paper has on it a learned professor of literature and belles-lettres, always ready to red-ink the essays of the beginner and give them the seeming of masterpieces . . . Some writers can boast that their works have been translated into all foreign languages, but when I look pathetically about for some little boast, I can only say that this one of my pieces has been translated into all the idiot tongues of English. 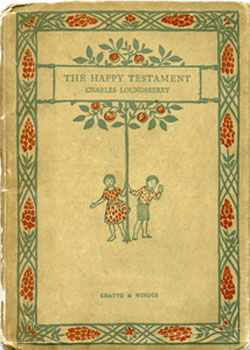 Williston Fish would have been especially annoyed by this London imprint, which not only contained the “improved” version he so despised, but also illustrated the text, spelled his ancestor’s name incorrectly, and erroneously claimed to be the first bound edition of the work. Chatto & Windus was originally a Victorian publisher of literature in London, founded by Andrew Chatto (1841–1913). The publisher remained independent until 1969 when it merged with Jonathan Cape. The firm published broadly in the field of literature, including novels and poetry. Chatto & Windus has been an part of Random House since 1987.

A Score by Irving Berlin 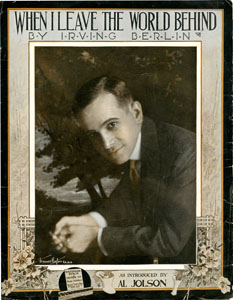 Irving Berlin (1888 – 1989) was one of the most prolific American songwriters in history. Berlin wrote both lyrics and music for his songs, although he never learned to read music beyond a rudimentary level. Often with the help of various uncredited musical assistants or collaborators, he eventually composed over 3,000 songs. Among his songs that remain well known are "God Bless America" and "White Christmas.” He also composed seventeen film scores and twenty-one Broadway scores.

This successful Irving Berlin composition was inspired by the Last Will. The man on the cover of the sheet music, Al Jolson, was a prominent American singer for many years. Jolson was never short of ego and billed himself as “The World’s Greatest Entertainer.” His voice was probably the most imitated and parodied in the world for a number of years.

A Fine Press Edition in Folio 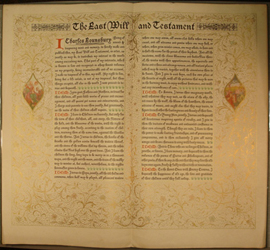 John Henry Nash (1871–1947) was a Canadian born American printer and bibliophile. After learning the printer's trade, he immigrated to the United States in 1894. He worked as printer and designer for Tomoye Press from 1903 to 1911, before founding his own press in 1916. After he closed his press in 1938, he became professor of typography at the University of Oregon. Nash published finely crafted editions of several works, including The Divine Comedy (1929), Benjamin Franklin's Autobiography, and Jerome’s translation of the Bible into Latin, the Vulgate (1932). He was famous for his collection of books with handmade bindings. 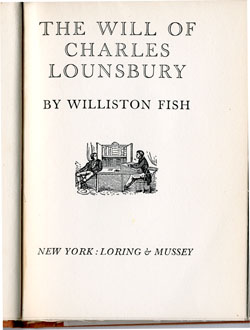 This small format edition includes the 1908 introduction by the author reviling the many unauthorized “improvements” made by newspapers – almost universally without acknowledging the author or earlier printings of the work. The Stephen Daye Press printed the book in Brattleboro, Vermont. 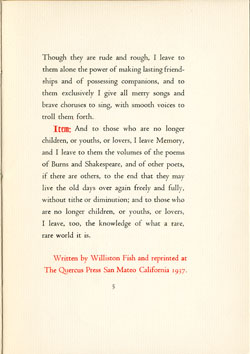 Theodore Lilienthal (1893-1972), the proprietor of the Quercus Press, was prominent  civic leader in the Bay Area, as well as a bookseller (Gelber-Lilienthal bookshop) and book collector. In the 1930’s, Lilienthal set up a press in his garden and began printing small runs of poems and other short works such as this impression of the Last Will. One of the presses acquired by Mr. Lilienthal was an Albion formerly used by Morris at the Kelmscott Press, and he occasionally borrowed the typeface of his friends, the Grabhorn brothers. The text in this edition is the “improved” version. 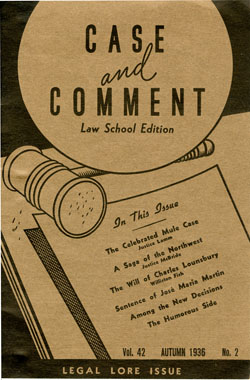 By 1936 the Last Will had been in circulation for almost three decades but had lost none of its appeal to the American public, particularly to members of the legal community.

In this reprinting, the editors took several departures from what had become the ordinary scenario: they acknowledged the original Harper’s publication, obtained permission to reprint it, recognized the fictional nature of the work, identified the author, and – perhaps most notably – reproduced the original text of Williston Fish. 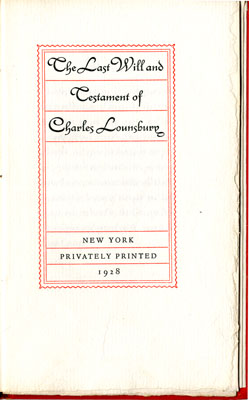 A private printing of the will in the form of a holiday greeting. Most of the salient features of the anonymous re-printings appear in this impression of the fictional will penned by Williston Fish in 1898. The work is presented as an actual will found in the pocket of a poorhouse inmate, and claims to have been probated at the wish of the Chicago bar. In addition to these fantasies, many of the gratuitous revisions Fish objected to in 1908 remain in the text. The edition was printed as a Christmas gifts, with the greeting of the giver printed in the forward. This was a popular format, and Tarlton holds many similar imprints.