Born Princess Sophia August Frederika in Germany, Catherine traveled to Russia with her mother when she was fourteen as 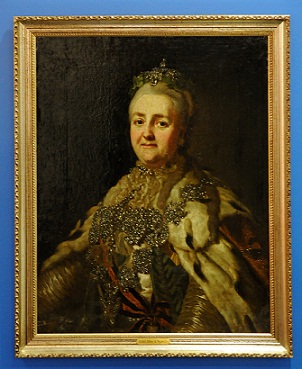 Peter ascended the throne in December  1761 following the death of Elizabeth. Peter’s pro-Prussian policies made animosity toward the ruler grow quickly. Six months after taking the throne, on June 28, 1762, a coup-d’etat put Catherine in power.

Catherine was crowned the most pious and Orthodox Empress Catherine II on September 22, 1762.  She cultivated the loyalty of the Russian people and under her reign, the nation saw an emergence of national culture and arts, music, and education flourished. After her death in 1796, her son Tsar Paul I ascended the throne.

This painting is based on Alexander Roslin's famous portrait of Catherine.

Born in Dublin, Robert Emmet  was exposed from an early age to republican political views by his older brother, Thomas Addis 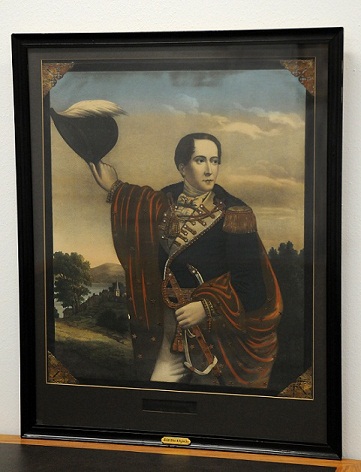 Emmet, and Thomas’s friend, Theobald Wolfe Tone. Emmet entered Trinity College in 1793 at age fifteen. In 1797, he was admitted into the College Historical Society, the first college debating society in the British Isles and the source of training for much of Ireland’s political class. Emmet became secretary to one of the four United Irish societies in college and was expelled in April 1798 by the Lord Chancellor of Ireland, John FitzGibbon.

After its defeat in the 1798 uprising, Emmet became active in reorganizing the United Irish Society. A warrant was issued for Emmet’s arrest in 1799, but Emmet escaped, traveling first to France and then Amsterdam.  Emmet returned to Ireland in October 1802 and lived quietly until March 1803. Emmet and other members of the United Irish Society planned to seize the main government buildings in Dublin and, towards this end, bought houses at strategic points in Dublin and amassed weapons behind false walls. After a premature explosion altered authorities, the rising had to be moved up to July 23, 1803. Troops were brought in and the plan was abandoned. Emmet was arrested in Dublin on August 25. 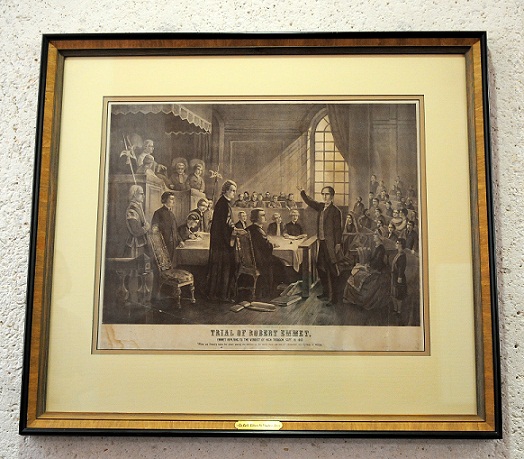 Emmet’s trial, conviction for high treason, and sentencing occurred on September 19, 1803 and he was hastily executed the following day. Known for his public speaking, Emmet delivered the following lines after his sentencing:

Let no man write my epitaph … and when I am prevented from vindicating myself, let no man dare to calumniate me. Let my character and my motives repose in obscurity and peace, till other times and other men can do them justice; Then shall my character be vindicated. Then may my epitaph be written.

Other versions have added the following:

When my country takes her place among the nations of the earth, then, and not till then, let my epitaph be written. I have done. 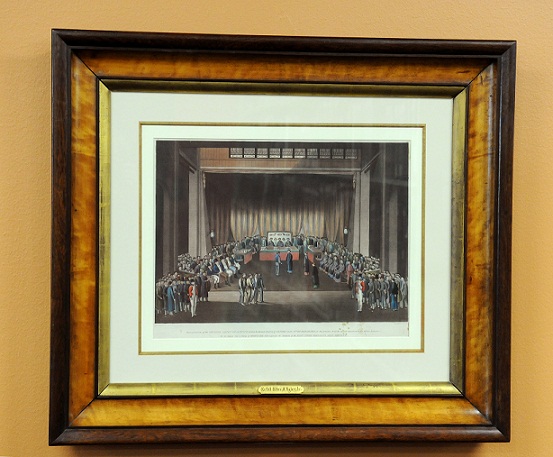 During the late 18th century, Canton, located in southern China on the Pearl River, was the only location in China where foreign trade was permitted. Regulations were strict and foreigners were required to stay in the “Thirteen Factories” quarter, where thirteen buildings were set up with trading offices, warehouses, and living quarters. On February 24, 1807, fifty-two sailors, on shore leave from the East India Company ship, Neptune, caused a brawl with Chinese citizens. One Chinese man was killed and several others wounded. Qing officials stopped all trade and sought to punish the guilty party. Mowqua, one of the leading merchants who acted as an intermediary between foreign traders and the Chinese government, took responsibility for negotiating a settlement. Three trials were held in the English factory at Canton and are notable for being the first time Europeans were allowed at a Chinese trial. The fifty-two sailors were each questioned and each denied that he had done the killing. Ultimately, one sailor, Edward Sheen, was found guilty of accidental homicide. He was detained in the factory for one year and was released upon payment of twelve taels, or four English pounds, which was the traditional Chinese penalty for accidental killing.

This print is created from a litograph produced by A.M. Gauci (fl. 1810-1846). The original painting, on which Gauci's lithograph was based, is attributed to Spoilum. Spoilum, also known as Guan Zuolin, lived in Canton and was active between 1770-1810. His paintings often depict merchants, both Chinese and Western, as well as landscapes of the trading area of Canton. Though Spoilum's works are some of the earliest known works of oil on canvas by a Chinese painter, he generally used a small amount of oil paint that had been thinned with water and his techniques are typical of traditional Chinese watercolors.

Found in modern Ghana, the Asante tribe of the Akan are the largest tribe in Ghana and one of the few matrilineal 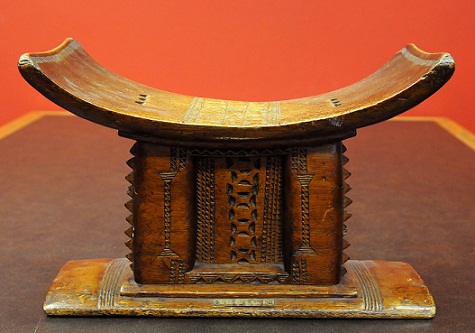 societies in West Africa. In the 15th and 16th centuries, trade flourished with the Songhai empire, Hausa states, and Europe, with gold exchanged for slaves and weapons. Agriculture thrived and slaves were used to clear the forests for farming. In addition to traditional crops of plantains, yams, and rice, maize and cassava were also planted. During the 1670s, Osei Tutu centralized the small Akan states into the hierarchical kingdom of Asante through diplomacy and warfare. Osei Tutu’s successor, Opoku Ware, increased Asante’s gold trade, reduced dependence on Europe by establishing distilleries and weaving industries, and increased the size of the kingdom. The Asante resisted the British in the early part of the 19th century and compensated for the loss of slave trade by increasing exportation of kola nuts with the northern regions of Africa. In 1873, the British captured the capital city of Kumasi and the Asante lost its independence a year later. By 1901, the region became part of the Gold Coast colony. After years of colonization, in 1935, the Ashanti Confederacy was restored by the Gold Coast government and 21 chiefdoms were recognized.

Although Asante stools are utilitarian objects and households would have several for visitors, these stools are also sacred objects. They are given as rites of passage, by the parents of a young boy or a groom to his bride. A person’s stool was thought to be imbued with its owner’s spirit, or “sunsum,” and sacredness of the stool increased with contact. When not in use, a stool is traditionally placed on its side so that another person’s spirit cannot settle on it.

Ornate carving, specific designs, and metal plating are often used on ceremonial stools. The Asante king possesses the Golden Stool, which symbolizes the unity of the tribe, and a number of other designs, including the elephant and leopard, are reserved for his use. State chiefs and other high ranking officials may own silver plated stools.

For notable members of the Asante, a stool may be blackened with soot and egg yolk upon death and preserved in a stool house where they are arranged in chronological order. Blackening is done to preserve the person’s memory, serve as a visible object of venerated ancestors, and enshrine the departed spirit.

From the Portuguese barroco and the Spanish barrueco meaning “rough or imperfect pearl,” baroque refers to an elaborate style of 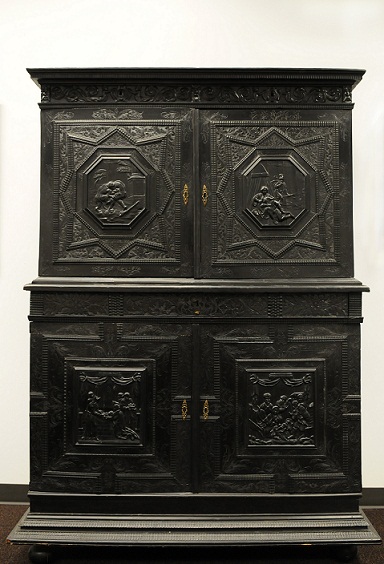 architectural decoration. The Baroque style evolved from the Catholic Church’s adoption of art as a means of making an emotional and sensory appeal to the faithful. The style is also influenced by the use of elaborate decorative elements by the aristocracy as a means of displaying power and grandeur.

Adopted in the Low Countries of Europe in the 1620s, the style was migrated to the Netherlands around 1640. Ebony was a preferred wood for Parisian cabinets in the mid-seventeenth century, imitating luxury furniture made in Belgium, and many early Parisian ébénistes, or woodcarvers, came from the Low Countries.

By the end of the 17th century, trade with East Asia and India, especially by the Portuguese, Dutch, and English, influenced the Baroque style, incorporating lacquer and heavy tropical woods imported onto the continent.

This piece was once owned by William Randolph Hearst. It is made of ebonized wood and depicts four scenes of the four outer cabinet doors – Samson fighting the lion, Samson and Delilah, the Nativity of Jesus, and the Circumcision of Christ. 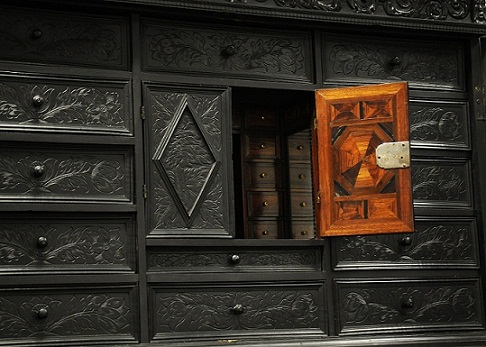 A label on the underside of the drawer between the upper and lower portions provides some history of the piece. Typed on a tag from Day & Meyer, Murray & Young, Inc. Fireproof Warehouses "for storage of fine household property and art objects" is the name W.R. Hearst and "AAA-Tolentino Sale 1925." Raoul Tolentino, an art dealer, traveled throughout Europe and sold his purchases through the American Art Association in multiple sales during the early to mid 1920s. 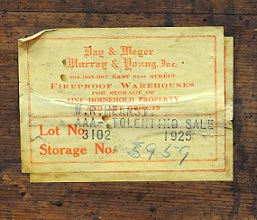 At age 23, William Randolph Hearst (1863-1951) became both publisher and editor of the San Francisco Examiner, owned by his father George Hearst. After success with the paper, he purchased The New York Morning Journal and began a contentious circulation war with Joseph Pulitzer and The New York World. At his peak, Hearst owned 28 papers in major American cities including Chicago, Los Angeles, Atlanta, and Washington, D.C. He also expanded into magazines, newsreels, and feature films.

Hearst was elected for two terms to the U.S. House of Representatives. Though he was unsuccessful in subsequent campaigns for mayor, governor, and lieutenant governor of New York, Hearst’s publications had enormous political influence.

Hearst’s circulation and revenue peaked in 1928, but the economic collapse of the Great Depression left the Hearst Company facing reorganization in 1937. Hearst sold a number of possessions, including this cabinet, at auctions and private sales beginning the same year to recover his losses.