At a young age, Wood was articled to an attorney, Jonathan West, who encouraged him to study for the bar at the close of his apprenticeship. 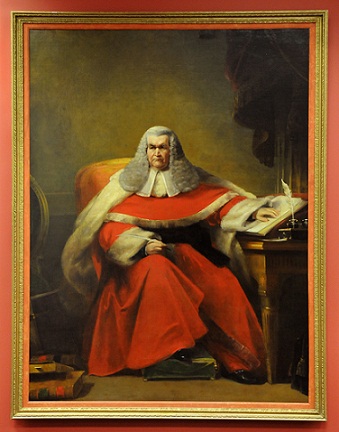 Wood entered the Middle Temple on November 16, 1765, but deferred his call to the bar to practice as a special pleader. He was highly skilled in this role and taught numerous legal scholars including Thomas Erskine and Charles Abbott, the future Lord Tenterden. Wood was called to the bar in June 1775 and went to the northern circuit. Through the 1790s, he was retained by the crown in numerous trials for treason and sedition.

On November 5, 1796, Wood was elected a Member of Parliament for Haslemere and served for ten years. In May 1802, Wood became a bencher, or senior member, of the Middle Temple. In 1807, he became a reader, appointed to give one or more lectures on a particular legal topic. In 1807, Lord Eldon, the Lord Chancellor, recommended Wood for a vacant position as the Baron of the Exchequer to King George III, citing Wood’s years of service and his knowledge of revenue law. Wood accepted the position and was made a serjeant at the same time. He was knighted soon afterwards.

Many of the cases before the exchequer during Wood's tenure were tithe disputes, conflicts about payment over church dues, and Wood frequently dissented from the majority opinion in its decisions. Encouraging reform on tithe laws, he privately circulated a pamphlet, later published in 1832 as Observations on Tithes and Tithe Laws. In it, Wood argued that it should be easier to show that an agreement existed between the Church and one or more parishioners to pay a lesser amount in lieu of tithes through long usage. For example, a parishioner may have allowed the use of pasture in lieu of tithes. As the law stood, regardless of how long the practice had been in place, the rector or vicar retained the land and received tithes as well unless the parishioner had a deed to show the agreement. In 1817, Wood persuaded J. H. Curwen to introduce into Parliament a bill, drafted by Wood, for this purpose. Considered hostile to the interests of the Church of England, the bill was defeated in the House of Commons in 1818.

The painting is attributed to James Lonsdale (1777-1839). A pupil of George Romney, Lonsdale became a fashionable portrait painter and portrayed many members of aristocracy and royalty. Lonsdale was one of the founders of the Society of British Arts. 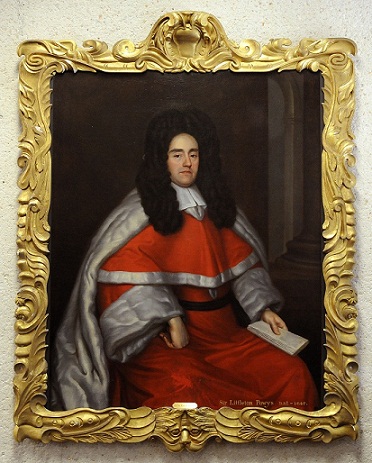 The older brother of Sir Thomas Powys, Littleton Powys was admitted to Lincoln’s Inn on May 12, 1664 and was called to the bar on May 16, 1671. Powys took an active role in the Revolution of 1688, reading the Prince of Orange’s declaration at Shrewsbury. He was given an appointment in July 1689 as second justice of Chester, made a serjeant at law in April 1692, and knighted in December of the same year. Powys was appointed a baron of the Court of Exchequer in October 1695 and remained there until he was raised to the King’s Bench on January 26, 1701. He was reappointed during Queen Anne’s ascension and again after the ascension of George I. Powys was elected a fellow of the Royal Society in 1724 and retired from his office in October 1726.

The artist is unknown.

Thomas Powys, the younger brother of Littleton Powys, was admitted to Lincoln’s Inn on February 19, 1666. He was called to the bar on April 24, 1673. He was elected bencher, or senior member, of his inn in April 1686 and 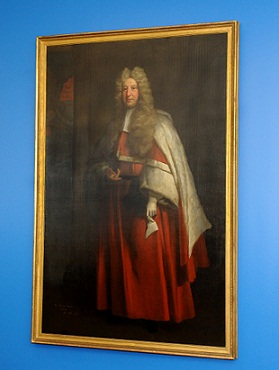 was appointed Solicitor-General and knighted the same year. Powys served as treasurer of Lincoln’s Inn in 1687, the same year King James II appointed Powys Attorney General. As Attorney General, Powys prosecuted the Seven Bishops who were tried for seditious libel after refusing to read the second Declaration of Indulgence issued by James II in 1688.

In 1701, Powys began serving as a member of Parliament for Ludlow, a position he held until 1713. Powys served jointly as a member of Parliament for Truro in 1702. Powys became a serjeant at law in 1702 and he served as the Queen’s Serjeant from 1702 until 1713. From 1707 to 1719, Powys served as a recorder, or judge, of Ludlow. In June 1713, Powys was appointed judge of the Queen’s Bench and held the office until George I’s ascension, upon which Powys was removed at Lord Chancellor Cowper’s advice due to his endorsement of King James’s policies. Powys appealed and was appointed as King’s Serjeant in October 1714, a position he held until his death in 1719.

The artist is unknown.

Keating was educated at Trinity College, Dublin and admitted to the bar from the Inner Temple on May 4, 1832. He practiced on the Oxford circuit and was made a member of the Queen’s Counsel in 1849. In 1854, he 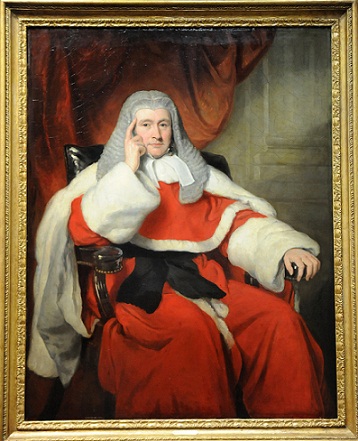 appeared as the plaintiff’s counsel in Hadley v. Baxendale (156 ER 145; 9 ExCh 341), an important case focusing on consequential damages arising for a breach of contract. During this time, Sir Keating authored the third and fourth editions of Smith’s Leading Cases with James Shaw Willes.

In 1852, Keating became a member of Parliament for Reading, a seat he held until he was promoted to the bench. In May 1857, he was appointed Solicitor-General and knighted. He lost his office when Lord Palmerston lost the Prime Ministership, but subsequently regained it when Palmerston again became Prime Minister in 1859. On December 14, 1859, Keating was appointed Judge of the Court of Common Pleas. Upon his retirement in 1875, Keating was sworn into the Privy Council.

The artist is Sir Andrew Morton (1802-1845), an English portrait artist who trained at the Royal Academy.

This 16th century Elizabethan, oak refectory table with a separate table top and base features 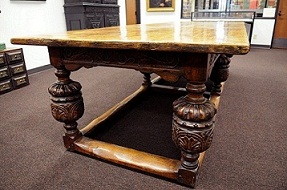 the carved cup and cover or “melon bulb” leg common in furniture design from 1560 to 1680. Once owned by patroness of the arts Florence Gould and used in her French villa, the table seated such luminaries as Salvador Dali, Henri Matisse, and Jean Cocteau. 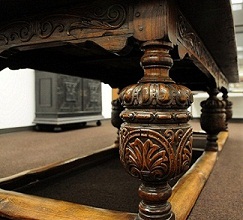 moved to France where they invested in Juan-les-Pins, a resort town on the Mediterranean.They had a large collection of French Impressionist paintings and frequently hosted artists and writers at their villa.

Mrs. Gould founded numerous literary and artistic prizes, including the Critics Prize, the Max Jacob Poetry Prize, the Roger Nimier Prize for literature, the Engraving Prize, and the Musical Composition Prize. At her death, she bequeathed her fortune to the New York foundation that bears her name, known for its gifts to cultural institutions.