A guide to the U.S. Supreme Court case in which the defendant, Hank Skinner, was represented by UT Law's Capital Punishment Clinic. 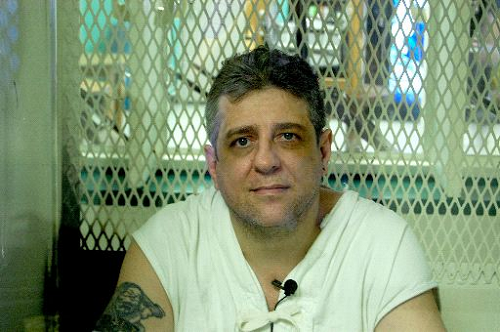 Photo by Janelle Stecklein for the Amarillo Globe-News.

Excerpted from the UT Law Magazine:

Hank Skinner was convicted and sentenced to death in 1995 for murdering his girlfriend Twila Busby and her two adult sons in their home in the Panhandle town of Pampa on New Year’s Eve 1993.

Skinner has sought access to certain evidence from the crime scene for the purpose of performing forensic DNA testing that he says could clear him. Only a few hairs have been previously DNA tested, and the results of those tests were inconclusive.

After failing to obtain such access though repeated formal and informal requests, as well as two separate state court proceedings under Texas’ post-conviction DNA testing statute, Skinner filed suit against Gray County District Attorney Lynn Switzer in November 2009. Skinner invoked 42 U.S.C. § 1983, alleging that the refusal to grant him access to the evidence under Texas’ DNA testing statute was so arbitrary as to deny due process of law. The district court dismissed Skinner’s lawsuit, and the Fifth Circuit affirmed, both relying on a 2002 decision in which the Fifth Circuit had determined that such an action could proceed only as a habeas corpus petition, not as a civil rights lawsuit.

That legal conclusion, shared by the Fourth Circuit, is at odds with the view of six other federal Courts of Appeals, and that conflict was the basis of the petition for writ of certiorari that Skinner filed with the Supreme Court in February as Skinner v. Switzer, No. 09-9000.

Following the Supreme Court decision, the case was remanded to the U.S. Court of Appeals for the 5th Circuit and then remanded to the U.S. District Court - Northern District of Texas. During this same time the state court case continued and the state withdrew its objection to DNA testing. As such, Skinner filed a motion to dismiss the federal case and it was granted. The case is currently before the state district court and DNA testing is ongoing. Arguments regarding the DNA evidence were held in Gray County District Court in front of Judge Steven Emmert in February, 2014.

The question before the Supreme Court was whether a convicted prisoner seeking access to biological evidence for DNA testing may assert that claim in a civil rights action under 42 U.S.C. § 1983, or if such a claim is cognizable only in a petition for writ of habeas corpus? The case was argued before the Court on October 13, 2010, and the Court issued its opinion on March 7, 2011. The Court held that there is federal-court subject-matter jurisdiction over Skinner's complaint, and that the claim he presses is cognizable under §1983. The Court noted that success in such a suit would only grant the prisoner access to DNA evidence, "which may prove exculpatory, inculpatory, or inconclusive." Justice Ginsburg delivered the opinion of the Court, with Justices Roberts, Scalia, Breyer, Sotomayor, and Kagan joining. Justice Thomas filed a dissenting opinion, with Justices Kennedy and Alito joining.