Tarlton Law Library has a long history of specialized publications. Information about two of these productions, The Legal History Series and The Oral History Series, may be found below. 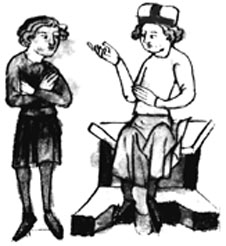 Now closely associated with the annual Rare Books Lecture, the Tarlton Law Library Legal History Series is celebrating its tenth year in production. In the preface to the inaugural volume -- Guillermo Margadant, Illustrations of the Sachsenspiegel: A Medieval German Law Book -- former director Roy Mersky expressed the hope that the series would inspire "exploration of the rich sources of our legal heritage," and that the series itself demonstrates the "importance of libraries and archives to legal history."

In 1986, Tarlton Law Library began collecting and publishing the oral histories of outstanding alumni and faculty members. In 2005 it became clear that the collection warranted its own series, and with the publication of an interview with alumnus Joe Jamail (UT Law 1953), the series was born. Each year the library strives to add two edited volumes to this growing collection, and so preserve the history and legacy of outstanding members of the UT Law School community in their own words.

Online Guide to the Oral Histories

Publications for sale at our online store