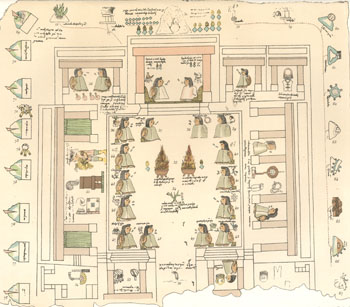 Texcoco was founded in the 12th century and grew to prominence within the Aztec Empire in the early 15th century through its leader, Nezahualcoyotl. In addition to collecting tribute through the Triple Alliance, Texcoco controlled its own conquered lands to the east of the Valley of Mexico. A separate discussion of Texcoco is warranted in this bibliography because the Texcocan legal system was highly sophisticated and had various important differences compared to the legal system in Tenochtitlan.

First, Nezahualcoyotl formally codified 80 laws for his empire that were divided into four parts. The enforcement of each part was left to four different supreme councils: the War Council, the Treasury Council, the Council of Music, Arts, and Sciences, and the Legal Council. The first three councils were made up of one representative from each of the 15 provinces in the empire. The War Council enforced laws concerning the military, including disputes over captives, battlefield conduct, and wartime treason. The Treasury Council enforced laws related to merchants and tribute collectors. The Council of Music, Arts and Sciences handled cases involving artisans, priests, superstition, witchcraft, and magic. This Council also regulated the schools, licensed teachers, and determined if censorship of art and crafts was necessary.

The Supreme Legal Council handled criminal, civil, and property matters. Decisions by local and provincial judges were appealed to this council, which was made up of six sets of two judges from the various geographic regions. These cases could in turn be appealed to two supreme judges, who issued sentences only with the approval of the Texcocan ruler. The Texcocan ruler turned to his divine tribunal for advice on serious cases and death sentences, had a separate ruler's tribunal to handle less critical matters, and was advised by 14 great lords on political and legal issues affecting the empire. As with the legal system in Tenochtitlan, cases had to be resolved within 80 days. There is some evidence that judges followed precedent, and also made decisions based on what was reasonable under the circumstances of the specific cases.

Although Texcocan laws were strictly enforced, Nezahualcoyotl was merciful. He had corn planted along public roads so that hungry individuals could eat and not be accused of theft. Begging was also prohibited by death, but the Texcocan ruler gave food and clothing to the needy and to wounded soldiers.

Second, the Texcocan empire had highly complex property laws. Land was divided into six categories. Tlatocamilli land was royal land that was farmed by calpulli members for the benefit of the ruler. Tecpantlalli lands were lands on which the royal palaces were located. Commoners worked these lands and were employed as palace servants. Calpulalli were calpulli lands designated for use by commoners, but were owned by nobles. Pillalli lands belonged to minor lords. These lands could not be sold, but could be passed on to heirs or would otherwise revert back to the state. Tecpillalli lands belonged to minor lords related to ancient lords, and to merit-worthy warriors and other individuuals. These lands could be sold to other nobles. Yaotlalli lands were acquired through war.

Finally, the Texcocans had complex inheritance and succession rules. Children had the legal right to inherit property from their fathers, and could only be disinherited for violence, cowardice, cruelty, or wastefulness. Property generally passed from father to son. Among nobles, the first born son was usually the first in line to receive the inheritance. However, if he was deemed unsuitable, a different son was selected based on his merit and abilities. Commoners tended to divide their property equally among the offspring of the deceased, and there is some evidence to suggest that women inherited property.

Image Information: Mapa Quinatzin - depicts the government structure and activities of Texcoco under Nezahualcoyotl. Nezahualcoyotl and his son sit at the top in the center of the image, and the 14 great lords are seated in the central courtyard. The symbols around the edge of the image represent the various towns that were required to pay tribute to the Texcocan Empire (Aubin).