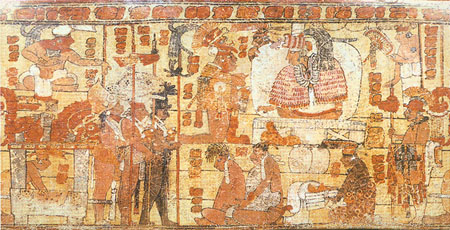 The Ancient Maya shared a similar ideology and worldview, but they were never united as a single empire. Instead, the Maya lived in individual political states that were linked together through trade, political alliances, and tribute obligations. Some of these states were independent, while others were part of larger political hierarchies. The Maya states were initially governed by simple chiefdoms. By the Classic Period, Maya governance had taken on the form of powerful centralized leaders who legitimized their authority through their political connections and their divine lineages. Individuals who disobeyed their rulers faced severe punishment because the Maya people believed that obedience to their leader was critical to maintaining the harmony of the Maya universe. Human sacrifice had begun prior to the Classic Period, and was used as a tool of social and religious control to demonstrate the power of the ruler and the gods.

At the time of the Spanish conquest, the Yucatan was divided into 18 separate Maya states, with many smaller towns and villages under the jurisdiction of a capital city. Nine of these states were ruled by a single ruler called a halach uinic (or ahaw), while the others were led by councils of nobles of elite lineage or were allied with larger states. The halach uinic’s power was limited by his council (holpop) and special military and foreign advisors, but he was still considered to be the highest authority in his state and was required to be from an elite lineage. Rulers were succeeded by their sons, brothers, or a suitable candidate who was selected by the priests and council if no relatives existed.

Each of the Maya states had a supreme military commander called a nacom. The nacom served a three year term and was responsible for formulating military strategy and calling troops to battle. The individual states also had a high priest who led a hierarchy of priests, determined the dates for festivals and ceremonies, and foretold auspicious events for the ruler. The halach uinic appointed the batabs, who were the overseers and administrators of dependent cities and villages within the state. Batabs usually held administrative, judicial, and military authority over their towns, ensured that tribute was paid to the halach uinic, and supplied troops in times of war. Batabs were not paid tribute, but were supported by the people who lived in their town. Each batab presided over a local council composed of town officials known as the ah cuch cabob. These councilors were the heads of the different subdivisions (nalil) within the towns. The Batabs also had assistants (al kuleloob) who assisted them with carrying out their government duties. Each town had constables (tupiles) who were supervised by the batab and were charged with keeping the peace.

Image Information: Image of prisoners being presented to the halach uinic (ahaw), who is seated on the throne and is also greeted by an arriving dignitary (Reents-Budet, from ceramic vase).