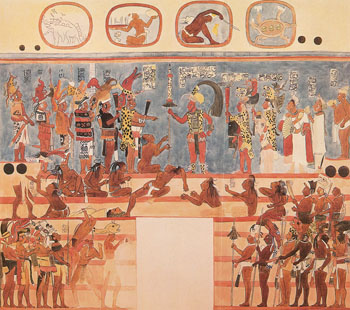 War was a common occurence throughout the history of the ancient Maya, and was conducted for the purpose of destroying rival states, gaining tribute, and capturing victims for human sacrifice. The halach uinic was considered the supreme military leader and was assisted by the nacom, a military adviser who was elected to this post every three years. When wars were declared, the batab was responsible for providing troops from his town to be sent to battle. However, it is not known how these troops were organized, trained, or supplied. During combat, nobles who were captured were immediately sacrificed. Other captured soldiers were forced to become slaves and were sometimes treated in a humiliating manner by the conquering army. Wars typically did not last for a long duration, and the Maya did not destroy cities because this could adversely affect their ability to collect tribute from the conquered regions.

Very little is known about foreign relations between the Maya and the Aztecs, though it is understood that the two regions engaged in trade and that the Aztecs collected tribute from certain Maya regions. It is not clear whether the Maya had nobles who served as ambassadors for their states and managed foreign relations with the Aztecs and other indigenous groups.

Image Information: Prisoners of war being brought before the Maya ruler of Bonampak and his court. Murals of Bonampak (Miller).