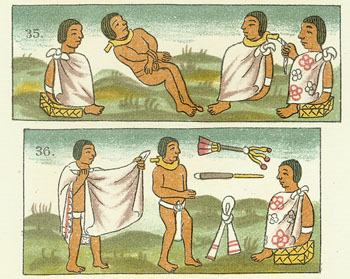 The Aztecs followed a strict social hierarchy in which individuals were identified as nobles (pipiltin), commoners (macehualtin), serfs, or slaves. The noble class consisted of government and military leaders, high level priests, and lords (tecuhtli). Priests had their own internal class system and were expected to be celibate and to refrain from alcohol. Failure to do so would result in serious punishment or death. The tecuhtli included landowners, judges, and military commanders. Nobles were entitled to receive tribute from commoners in the form of goods, services, and labor. Noble status was passed on through male and female lineages, and only nobles were permitted to display their wealth by wearing decorated capes and jewelry. 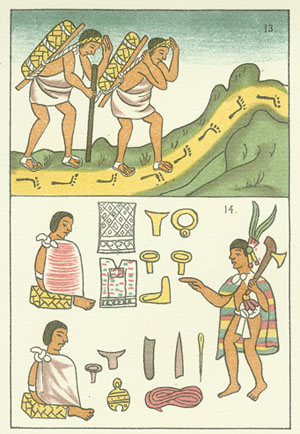 The commoner class consisted of farmers, artisans, merchants, and low-level priests. Artisans and traveling merchants enjoyed the greatest amount of wealth and prestige within this class, and had their own self-governing trade guilds. Commoners generally resided in calpulli (also referred to as calpolli), or neighborhood wards, which were led by a single nobleman and a council of commoner elders.

The Aztecs additionally had landless serfs and slaves. Serfs worked land that was owned by nobles and did not live in the calpulli. Individuals became slaves (tlacotin) as a form of punishment for certain crimes or for failure to pay tribute. Prisoners of war who were not used as human sacrifices became slaves. An individual could voluntarily sell himself or his children into slavery to pay back a debt (the latter required permission of the court). Slaves had the right to marry, to have children, to substitute another individual in their place, and to buy their freedom. Slaveowners were responsible for housing and feeding their slaves, and slaves generally could not be resold. They were usually freed when their owners died, and could also gain their freedom by marrying their owner. Aztecs were not born slaves and could not inherit this status from their parents.

Women had limited leadership roles within the Aztec empire. There is evidence that they had administrative roles in the calpulli and markets, and also worked as midwives and priestesses. However, the top administrative positions were limited to men, and women were not permitted to serve as warriors. 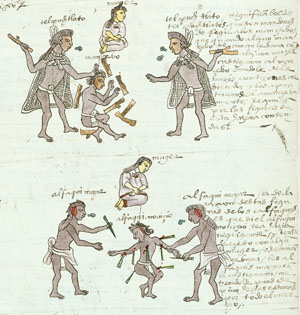 All Aztec children attended school, though their curricula varied by gender and social class. Each calpulli had a school for commoner children known as a telpochcalli. The purpose of the telpochcalli was to train young men to be warriors, and boys generally began their training at the age of 15. Noble children and exceptionally gifted commoner children attended the calmecac schools, where they received training to become priests and government officials. While military training was provided, the calmecac offered more academic opportunities than the telpochcalli. Children typically began attending the calmecac between the ages of 6 and 13. The schools imposed harsh punishments on their students for misbehavior and the calmecac were especially strict because noble children were held to a higher standard than commoner children.