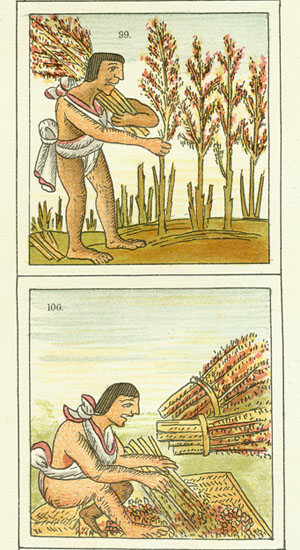 The Aztecs had a complex and hierarchical land ownership system, and drew sophisticated boundary maps that were used to mark different types of land and settle disputes. The Emperor owned personal and royal property which was used as he saw fit. He additionally exercised dominion over newly conquered lands, and could give this land to nobles, warriors, and calpulli. Owners of conquered lands were not necessarily displaced and were usually allowed to continue living on and working their lands. However, they had to share the profits of the land with their new Aztec owners.

Nobles could own land on a restricted and unrestricted basis. Nobles obtained land by purchasing it from other nobles or as a gift from the emperor for service to the Aztec empire. Purchased land could be sold or willed. Land grants from the emperor sometimes had conditions that required them to be returned to the emperor upon the death of the owner. Warriors had similar rights to purchase land or receive it from the emperor. Institutions such as the army, temples, and certain public offices (judgeships) could also own land which was received from the Emperor. These entities owned the rights to the profits from the land and used them to support the office holder. However, the individual office holder did not own the land.

Commoners could not own land on an individual basis. However, they had access to land through their calpulli. Although the calpulli were run by nobles, members of the calpulli were permitted to elect a neighborhood leader (calpullec) to manage the distribution of communally-owned calpulli land. This land was given to individual families, and generally stayed with the family unless it went uncultivated for two years or the family moved away. If this occurred, the unused land would then be redistributed to other families. The barrios also had separate undistributed communal lands that families were expected to cultivate. The proceeds of this land were used to pay the barrio’s taxes to the nobles and the emperor. Although the calpulli was responsible for dividing and reassigning the land, individual plots of land were often inherited by subsequent generations of the same family.