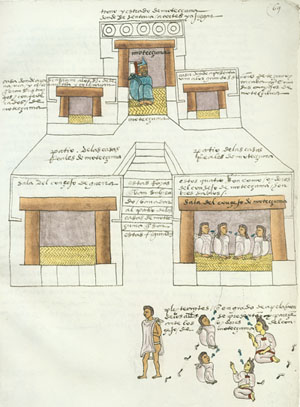 The Aztec empire was made up of a series of city-states known as altepetl. Each altepetl was ruled by a supreme leader (tlatoani) and a supreme judge and administrator (cihuacoatl). The tlatoani of the capital city of Tenochtitlan served as the Emperor (Huey Tlatoani) of the Aztec empire. The tlatoani was the ultimate owner of all land in his city-state, received tribute, oversaw markets and temples, led the military, and resolved judicial disputes. The tlatoani were required to be from the noble class and of royal lineage. Once a tlatoani was selected, he served his city-state for life. The cihuacoatl was the second in command after the tlatoani, was a member of the nobility, served as the supreme judge for the court system, appointed all lower court judges, and handled the financial affairs of the altepetl.

New emperors were elected by a high council of four nobles who were related to the previous ruler. Emperors were usually chosen from among the brothers or sons of the deceased ruler. They were required to be nobles, to be over the age of 30, to have been educated at one of the elite calmecac schools, to be experienced warriors and military leaders, and to be just. Although the emperor had absolute power and was believed to be a representative of the gods, he governed with the assistance of four advisors and one senior advisor who were elected by the nobility.

Image Information: The Palace of Montecuhzoma. The Emperor is seated at the top of the image, and his supreme judicial council is in the lower right chamber (Codex Mendoza).