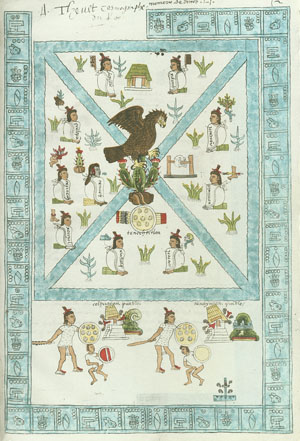 The term "Aztec" refers to the seven indigenous tribes who share the common language of Nahuatl and who settled in the Valley of Mexico prior to the Spanish conquest. These tribes, which include the Xochimilca, Chalca, Tepaneca, Colhua, Tlahuica, Tlaxcalteca, and Mexica, began migrating to the Valley of Mexico from their legendary homeland of Aztlan in the early 12th century. The Mexica were the last of the tribes to arrive in the Valley in approximately 1250. According to legend, the Mexica established their homeland in 1325 on an island in Lake Texcoco where they found an eagle on top of a prickly pear cactus (as had been prophesied by one of their priests). They named their island city Tenochtitlan. As the Mexica consolidated their power, Tenochtitlan became the capital of the Aztec Empire.

Tenochtitlan formed a strategic alliance with the neighboring Aztec city-states of Texcoco and Tlacopan in 1428. This alliance was known as the Triple Alliance and was created to provide security for the region and to ensure an equitable system of tribute from the conquered territories. Under this alliance, Tenochtitlan and Texcoco each received 2/5 of the tribute, and Tlacopan received the remaining 1/5 portion. Although Tenochtitlan was the political and military leader of the alliance, each member retained its own legal, economic, and religious systems. Moreover, the Aztecs usually did not impose their laws or customs on the people that they conquered. The Triple Alliance dissolved in 1515 after Tenochtitlan won a power struggle with Texcoco for control of the leadership of the Aztec Empire. 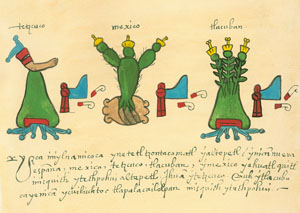 By the time of the Conquest, approximately 1 million people were living in the Valley of Mexico, with 250,000 in Tenochtitlan alone. The Spanish conquistadores who arrived in the region in 1519 were stunned by the advanced Aztec civilization and compared Tenochtitlan to the city of Venice. The Spaniards conquered the Aztecs in 1521, destroyed the great temples and vestiges of this civilization, and built Mexico City on top of its ruins. However, the legacy of the original Aztec empire survives today through its archaeological treasures and the indigenous Nahua people, who are the modern descendants of the Aztecs.