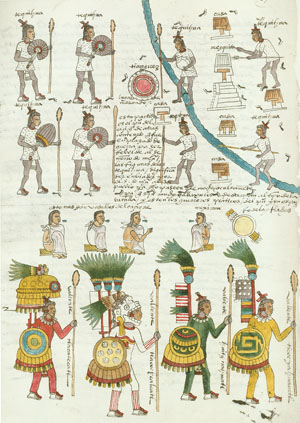 The Aztec empire was strongly militaristic and its relations with other territories typically revolved around war. The Aztecs conquered neighboring regions in order to collect tribute and obtain captives for human sacrifice. War was justified when a territory closed its roads to commerce, when a merchant or ambassador was killed, or if a territory refused to pay its required tribute. A ritual was followed for declaring war. The Aztec Emperor would issue a declaration of war and envoys were sent to the enemy region. The enemy was given a gift of weapons and 20 days to respond to the declaration and submit to Aztec authority. If no agreement was reached, the enemy was brought another gift of weapons and given another 20 days to respond. If no agreement was reached after this second offering, a third and final warning was given with harsher terms. If no agreement was reached after the final warning, the Aztec army would attack within twenty days. Enemy kings suffered personal punishment by the Aztecs if they waited until the third warning to accept the Aztec empire's terms. During combat, captured warriors were enslaved and sacrificed. Captives had the option of fighting Aztec warriors in order to obtain their freedom and would be forced to fight with a handicap (such as with one hand tied behind their backs). If the captured warrior won the fight, he would be set free.

The Aztecs also engaged in what were known as "flower wars." These wars were conducted to provide warriors with battle training and to obtain human sacrifices for religious ceremonies. Human sacrifice was important to the Aztecs and was done to appease the gods and maintain the balance of life in the universe. Most sacrificial victims were warriors captured in battle. To be sacrificed was an honor because it was believed that this would guarantee life after death.