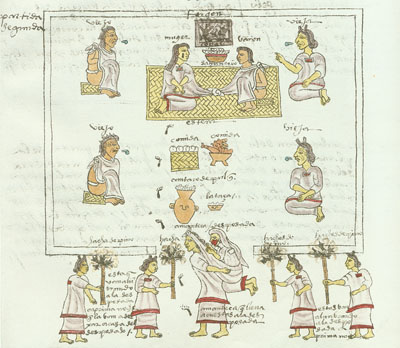 Aztec family law generally followed customary law. Men got married between the ages of 20-22, and women generally got married at 15 to 18 years of age. Parents and relatives decided when and who their children would marry, and sometimes used marriage brokers. Nobles could only marry other nobles, and marriages were often used to form political alliances. Marriage ceremonies had to follow certain rituals in order to be legally recognized.

Marriage was conditional in that the parties could decide to separate or stay together after they had their first son. Marriages could also be unconditional and last for an indefinite period of time. Polygamy and concubines were permitted, though this was more common in noble households and marriage rites were only observed with the first, or principal, wife. Aztec families could live in single family homes, though many opted to live in joint family households for economic reasons. 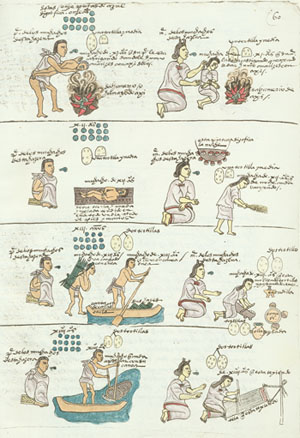 Aztec families were very close knit. Children were considered gifts from the gods, but were expected to be obedient to their parents and elders. Parents were permitted to physically punish their children, and would beat them using maguey spines or force them to inhale chili smoke. Children who became orphaned lived with aunts and uncles or other family members. Fathers were responsible for raising their sons, and educated them until they began school. Mothers took care of raising the girls in the family.

There was no divorce, but men and women could petition the courts for legal separation on the basis of incompatibility, misconduct by the wife, insanity by the wife, abuse by the husband, laziness by the wife, infertility, or financial debt. Courts generally tried to encourage reconciliation where possible. Simple abandonment of a household by one party was also sufficient to establish a legal separation. Once the couple separated, the sons went to live with their father and the daughters stayed with their mother. Property registered at time of marriage was returned to the party who brought it to the marriage. If there was a guilty party in the marriage, the offender forfeited half of the community property to the other spouse. Divorced and widowed parties could get remarried. Widows had the option of marrying their husband's brother as well.

There is some conflicting information among researchers regarding inheritance rights. According to Avalos, women had no inheritance rights and the first born son inherited all property from his father. A trustee would be appointed if the heir was still a minor. If there were no male children, property was passed on to the nearest male relatives, and if no male relatives existed, the property went to the state. However, Avalos acknowledges that a father could create a will as he saw fit, with property conceivably going to his wife or daughters. According to Kellogg, men and women could both acquire property through inheritance, though the right of women to inherit property may have been limited by the fact that the deceased’s brother would usually act as a guardian of the estate.