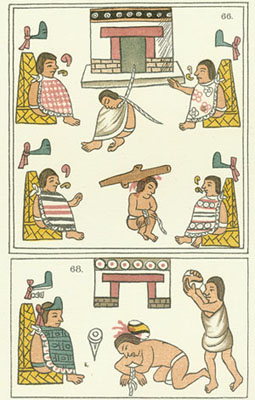 Under the Aztec legal system, crimes were severely punished. While capital punishment was common, other punishments included restitution, loss of office, destruction of the offender’s home, prison sentences, slavery, and shaving the offender’s head. For certain crimes, punishment could extend to the family of the guilty party. These crimes included theft, treachery, and a priest’s violation of the rule of chastity. The Aztecs had a prison system, which included the cuauhcalli (a "death row"), the teilpiloyan (a debtors’ prison), the petlacalli (a prison for individuals who were found guilty of minor crimes), and a fourth type of prison which involved a judge drawing lines or placing sticks on the ground and ordering the prisoner not to cross them. Conditions in the petlacalli were so harsh that many prisoners died while in custody.

Numerous offenses were punishable by death, including homicide, perjury, rape, abortion, highway robbery, moving boundary markers, serious defamation of character, destruction of crops, selling stolen property, weight and measure fraud, witchcraft, incest, official graft, pederasty, inciting a public disturbance, sedition, treason, desertion or insubordination by soldiers, use of the emperor’s insignia, and serious judicial misconduct. Capital punishment could be carried out through hanging, drowning, stoning, strangulation, beheading, beating, disembowelment, burning, quartering, and opening the chest to remove the perpetrator's heart. It was possible for victims or families of victims to intervene in the execution of a sentence. If they chose to forgive the perpetrator, his death sentence was removed and he would become a slave of the victim’s family. 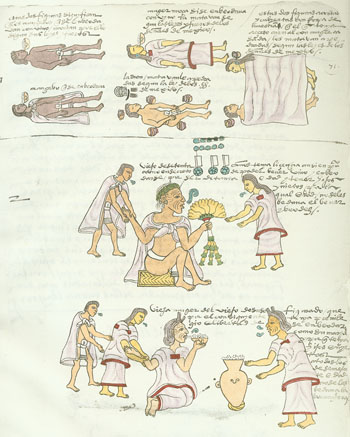 Theft was considered a serious crime. Capital offenses included theft from merchants, theft from a temple, theft of arms or military insignia, and theft of more than 20 ears of corn. Petty theft was generally punished through restitution. If the perpetrator wasn’t able to pay for the stolen item, he became the victim's slave.

Adultery was a capital offense for the guilty couple and for those who were aware of the offense and failed to report it. Men were punished for adultery only they had relations with a married woman. Married women were considered guilty regardless of the circumstances of the marital status of their lovers.

Public drunkenness was punishable by death for younger individuals. However, elders could consume as much alcohol as they wished.

Children under the age of ten were considered to be legally incapable of committing criminal acts, but were still expected to respect and obey their parents. If they failed to do so, their parents could bring them before the court, which could order punishments such as beatings, disinheritance, or death (especially if children assaulted their parents). Children of nobility were sentenced to death if they were disrespectful, cowardly, or wasteful.

Image Information: Top Image - Judgment and punishment of criminals (Sahagún, Historia...de Nueva España). Bottom Image - A young couple committing the illegal act of public intoxication. This is followed by an elderly couple drinking pulque (an alcoholic beverage), which was permissible according to Aztec law (Codex Mendoza).