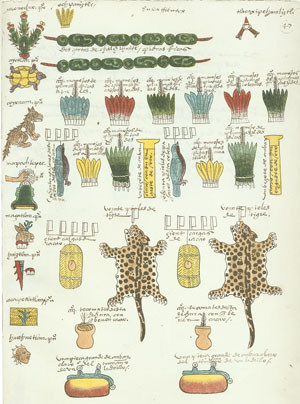 A strong system of laws governed the economic operations of the Aztec Empire. The main sources of income for the empire were tribute and taxation. The conquered regions paid tribute to the emperor and the Aztec citizenry paid taxes (with the exception of priests, nobles, minors, orphans, invalids, and beggars). Merchants paid taxes on the goods that they sold, artisans paid taxes based on the value of their services, and barrios paid taxes through the crops that they produced. Failure to pay taxes was punishable through slavery or the confiscation of property.

Tribute was collected as a collaborative effort by the members of the Triple Alliance every 80 days, 6 months, or 12 months, depending on the goods being collected and the distance that they had to travel. Tribute items typically included warrior costumes and shields, tropical feathers, copal incense, paper, foodstuffs, and animal products. Official tribute collectors, known as calpixque, were located in each of the conquered provinces and ensured that payments were made as required. Researchers have observed that tribute payments were generally reasonable, and were only increased if a region reneged on its tribute obligations. Regions that failed to pay tribute were severely punished. 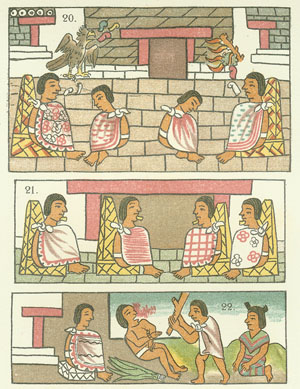 Merchants were extremely important to the Aztec empire, especially traveling merchants known as pochtecah who ventured into neighboring regions. Pochtecah were organized into their own calpulli and could pass their profession and land down to their children. They had their own guilds, laws of conduct, and courts to enforce their laws. They ventured into foreign regions to establish trade and sometimes served as messengers and spies for the Aztecs. Merchants who were attacked while on the road were expected to defend themselves, and were sometimes assisted by warriors. War was justified if the safety of an Aztec merchant was threatened.

Local commerce was required to be carried out in large marketplaces known as tianquiztli. The various marketplaces were open once a week on rotating days, although the largest market in Tlatelolco was open on a daily basis. The marketplaces were patrolled by special commissioners who worked to prevent fraud and disturbances. Commercial disputes were settled in the marketplaces through special commercial courts that had the power to impose capital punishment if necessary. Sales were made on cash and credit. While there was no official currency, various goods functioned as money, including cacao grains, small squares of cotton cloth, small nuggets of gold, pieces of tin, and precious feathers.

The Aztecs used contracts to carry out their business activities. Contracts were formed verbally and became legal and binding when witnessed by four people. There is evidence to suggest that the Aztecs had sales, commission sales, lease, work, and loan contracts. Loan contracts used collateral in the form of property, goods, or future slavery if a default occurred. Interest on loans was illegal, although there is evidence to suggest that it was charged. A debt could be passed on to a party’s heirs, and loan defaults resulted in jail, slavery, or the confiscation of property.