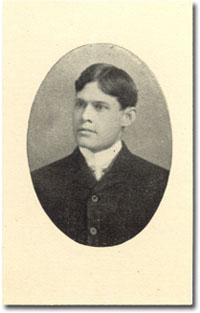 Peterson, an Adjunct Professor of Political Science, taught at the University of Texas from fall 1904 through spring 1907, leaving in 1907 to enter private practice with Otto Taub in Houston. His legacy rests in fifteen diaries which cover over a decade of his life, including the years 1904, 1906, and 1907.

These diaries preserve a personal record of life in Texas and the University at the turn of the century, when the Law School was the Law Department, law classes convened in the Old Main building, and an offer of employment came by telegraph wire. During his time at UT, Peterson witnessed the establishment of Delta Chi, a law fraternity still active nationally, and participated in rituals such as the Law Department Smoker, which have since faded into history. He studied for, took, and passed the Bar Exam. He worried about his weight, fretted about public speaking, and struggled with the heat of Texas summers.

Enjoy the exhibit, and consider how much and how little has changed in 100 years.